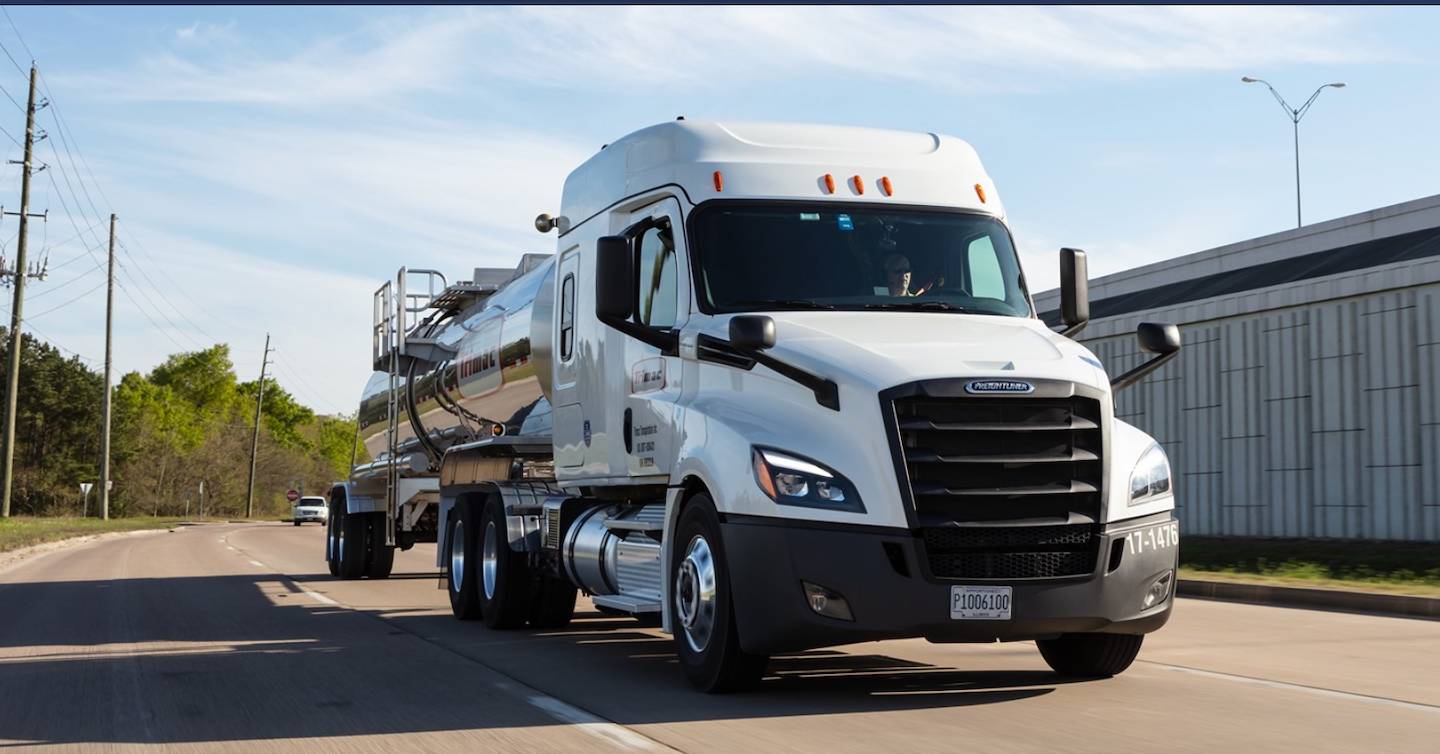 Trimac delivers about 3,000 loads per day and about 30% of their drivers’ workday involves handling product.

The difficulty in learning how to deal with dangerous situations is fairly clear. It’s hard to get hands-on real-world experience without exposing your mortality.

That’s why in 2018, Calgary, Alberta-based Trimac Transportation (CCJ Top 250, No. 66), a bulk carrier operating throughout the United States and Canada, left the real world for the virtual world in an effort to train its drivers on real problems without the threat of real ramifications.

“If you make a mistake, either in a regular product handling or if we expose you to an emergency situation such as a sudden hose rupture under pressure, there are no real-life consequences in VR,” said Marcel Pouliot, vice president of industry and regulatory affairs. “You get to learn that way. You get to develop the muscle reaction, the instincts that ‘if this occurs, I do that.’ ”

Pouliot recalled an incident in 2017 when one of Trimac’s most senior and experienced drivers found himself in an emergency situation while offloading sulfuric acid.

The customer’s frozen pipes at the driver’s stop forced him to start and stop the offload multiple times, and Pouliot said the driver, on the last pause and attempt to disassemble his equipment, “opens the cam lock ears on the fitting on a 2-inch hose, and of course, now the acid is gushing out at 25 psi of pressure.”

Fortunately, the driver was wearing protective equipment and escaped largely unscathed, “but you can imagine the level of adrenaline this guy has,” Pouliot said, noting the driver ran to the trailer’s rear to shut the valves off manually despite having an emergency shutoff at the trailer’s nose.

“If something goes wrong, you run away, you activate [the emergency shutoff valve], and then you run into the shower,” he said. “He started manually closing the valves the way he would during his normal course of business.”

Pouliot said he looked closely at Trimac’s training regimen to understand why a driver with so much experience would miss such a crucial and seemingly easy step.

“I realized that in our company, a 20-year driver – someone that would do this job for 20 years – has less than a 1% chance of ever activating that valve in their career,” he said. “So there’s no muscle memory there. The training we do is, we talk about it, explain it, we show them where it is, but they never actually do it.”

“All we could do is tell the drivers that if this occurs, get out of the flow of the product, use the remote emergency valves to shut it off, and those types of things,” he said.

Trimac delivers about 3,000 loads per day, and about 30% of its drivers’ workday involves handling product.

Out of the training manual but out of harm’s way 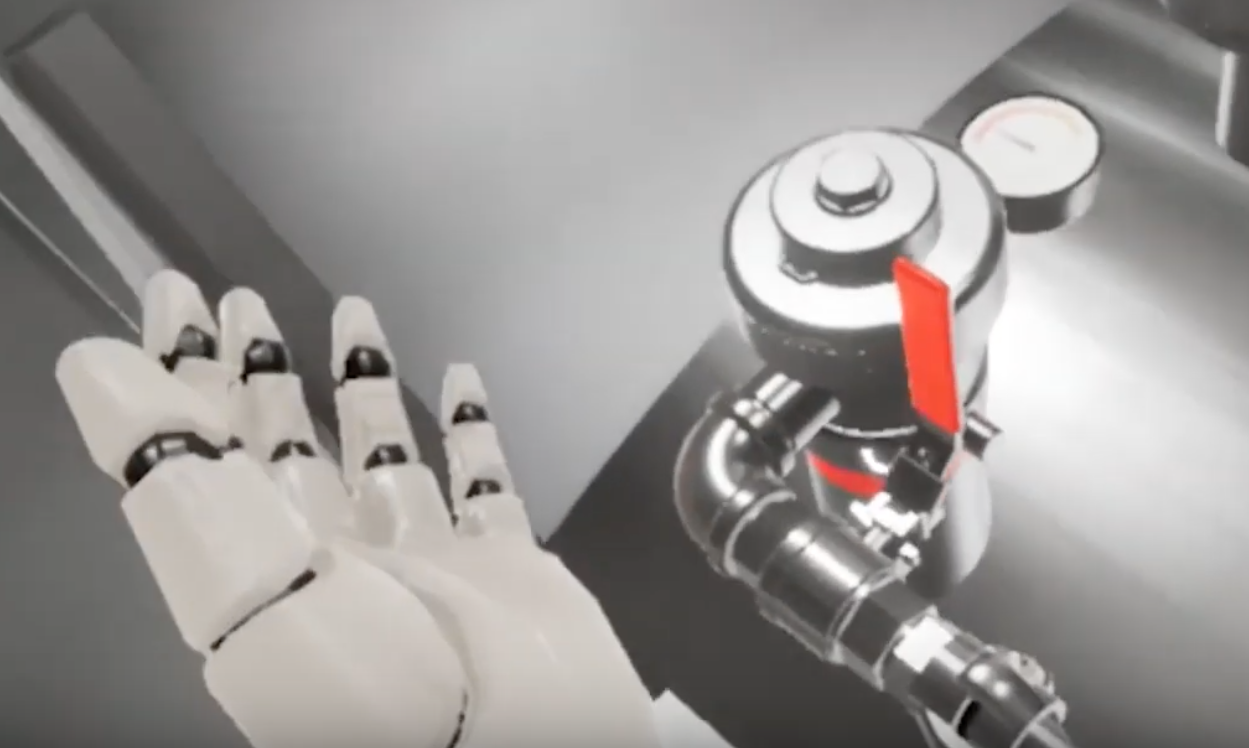 During the training, the user wears a headset (below) and holds a controller in each hand, allowing them to use their hands in the virtual environment (above).

Trimac’s product handling training program includes traditional curriculum such as classroom time, manuals, written aids and hands-on learning. But inspired by that 2017 incident, the company partnered with Calgary-based AR/VR production studio Mammoth XR to develop a virtual reality e-learning platform that takes training beyond the classroom without actually leaving it.

“You can really replicate the product handling that you do in real life in a completely safe and secure digital environment,” Pouliot said. “You can learn the basic skills and the complex skills, but [with VR] we can also recreate dangerous situations – an unforeseen hose rupture, the fitting falls off the receiving pipe at the customer, things of that nature – that we can’t do hands-on in real life.”

Trimac secured a 3D AutoCAD drawing of its trailers and provided it to Mammoth XR, which was charged with bringing the draft to life by importing the engineering drawing into the VR architecture and activating all the componentry on the tank trailer.

“The trailer that our people use, it’s not a rendering,” Pouliot said. “It’s actually the trailer, precise to every bolt and bracket that’s on there that you’d have in real life.”

But simply handing over the trailer specifications to Mammoth XR wasn’t enough for Pouliot, so his team trained the developers on how to operate a tank trailer safely “so that they understood what happens in real life, and they’re able to represent that better when they’re actually coding to the VR to do that activity,” he said.

While the Mammoth XR development team worked on the technology, Trimac developed the actual training course content relative to the steps trainees should follow to complete assigned tasks successfully.

“That’s why it was important for us to show [the developers] what a trailer is, and get them to lift a hose and do those types of things, so they could simulate that in VR as real as if you were standing outside,” Pouliot said.

An expensive proof of concept

Trimac initiated a small test in early 2018. During the training, the user wears a headset and holds a controller in each hand, allowing them to use their hands in the virtual environment.

Feedback from drivers who went through the course was positive. But by the end of 2018, despite the trial’s success, the costs of technology and development made a rollout to the company’s 94 facilities unfeasible, and the idea was placed on pause, Pouliot said.

“When we purchased the equipment [a high-powered computer, headset and hand controllers] just for the demo, just that one set cost like $8,000,” he said.

But cost wasn’t the only factor in the decision to shelve the program temporarily, as concerns mounted over how quickly technology in this space evolves.

“I didn’t want to spend a million bucks on something that would be obsolete right now, because the standards of how they design these things, the gaming engines they use, are so much better now than they were just a year, year-and-a-half ago,” Pouliot said.

Over the course of 2019, VR technologies improved exponentially, while the cost of the units crashed. This year, Trimac plans a full rollout of its VR training platform and should be able to deploy the technologies for significantly fewer dollars than would have been possible just 18 months ago, Pouliot said.

“Today, you can go out, and for less than $1,000, you can put on an Oculus headset that is totally standalone and Wi-Fi-connected,” he said. “You download the program into it, and the people just play. We reached the conclusion that the VR systems currently coming out will offer a good commercial solution for training our staff at numerous locations across North America. Therefore, we will move forward with our first comprehensive Virtual Reality product handling training for tank truck drivers in 2020.”

Having this virtual world at a trainee’s fingertips can separate the drivers who have a sound fundamental understanding of the fleet’s safety measures from those who are simply good guessers on multiple-choice written tests.

“You can’t cheat VR,” Pouliot said. “If you go in and you do it and you pass, it’s because you know how to do it as opposed to just picking A, B, C or D. It’s as accurate as having a trainer stand next to you and observe the whole process. This works. This will achieve all of the learning objectives that we have and help our people practice and be better prepared if and when something goes wrong in the field.”

Pouliot said his goal is for VR to lead Trimac to its goal of zero incidents, but he also sees an opportunity to promote the platform as part of a certification program for product handling — a standard that currently doesn’t exist.

“To be able to come up with a nonregulatory training certificate saying ‘This person has completed this course, has displayed a high level of comprehension and is able to perform this task,’ ” he said, adding that such a designation would facilitate onboarding as certified drivers move between tanker fleets.