Jason Cannon, CCJ chief editor
Aug 12, 2021
When I was a kid, mini-Stuckey's pecan logs were a staple in my grandparents' snack box.

Come Christmastime there was Stuckey's pecan divinity because you need a chemistry degree to make divinity in Alabama humidity, even in December.

I had no idea what a Stuckey's was; probably a candy company. A Stuckey's pecan log is like a Reese's peanut butter cup, right? But there were also some coffee mugs in the cabinet. Maybe it was a gift shop? What I didn't know is that Stuckey's was all that and then some. Or, it used to be.

By the time I was growing up in the early '80s, Stuckey's was about 20 years removed from its place as the roadside travel oasis, and it was being churned off the roadside by the likes of Love's, Travel Centers of America, Pilot Flying J and Buc-ees.

Stephanie Stuckey, granddaughter of Stuckey's founder W.S. "Sylvester" Stuckey and current CEO of the company that was sold the year before she was born, has made it her mission to return Stuckey's to the throne of truck stop royalty, although she's blazing a different path to get there.

Hear Stephanie Stuckey tell the story of her legendary family business on this week's 10-44 webisode in the video above.

At its peak in the 1960s, Stuckey's had 368 stores, and its iconic teal roof was a roadside lighthouse in more than 40 states, with each location offering souvenirs, clean restrooms, fuel, and, of course, its renowned candies.

"We were the very first retail roadside chain that offered gas, souvenirs, a hot snack – a quick snack. It wasn't a full-service, sit down restaurant. Clean restrooms – all the basics that the traveling public could want," Stephanie Stuckey recalled. "[W.S. Stuckey] had this saying, 'Every traveler is a friend,' and he really meant it. He welcomed everyone. We welcomed traveling families, traveling business people, truckers, RV'ers – black, white – we were one of the few locations in the South, especially during the Jim Crow Era, that was never segregated."

By the mid-60s Stuckey's had merged with the company that manufactures Pet Milk and within about a decade saw its empire dwindle to fewer than 75 locations thanks in part to an oil embargo that made traveling expensive, an expanding Interstate system that sucked traffic away from the highways and byways, and a buyout of Stuckey's parent company that didn't prioritize the travel stop business.

"We got the company back in 1985," Stuckey said, noting that her father was a serial entrepreneur. "Stuckey's at that point was really faded. Not doing well. And he kept it alive. He propped it up."

"It's more than a project. It's really a calling."

Stuckey noted that following her father's retirement, the brand started to suffer once again, so she bought it in November 2019 – "a complete career pivot at age 53," she said, having previously served as a U.S. Representative and Head of Sustainability for the City of Atlanta. "My background is environmental law."

Stephanie's career isn't the only thing to pivot in her quest to restore the brand to its former glory. She's keenly aware that in the time since Stuckey's heyday, large truck stop and travel center chains have unfurled massive footprints. So, in bringing her family business back from the brink, she said her focus is on the things that her company does well and what make it unique.

"We started as a pecan stand on the side of the road. And we began selling pecans, and that is how we're turning the company around," she said. "We're also selling candies that we're really well-known for – the pecan log roll in particular but pralines, divinity, fudge. All of this was what was our differentiator. I realized how my grandfather made his money – 80% of his profit was sale-of-product."

To support its new (or refocused) business model, Stephanie in the past 18 months has acquired a candy plant, a pecan shelling facility, a fundraising business and a healthy nut company, and she has honed in on securing vendor relationships with travel centers and fueling stops to sell its products. Stuckey's goods are currently sold in five Pilot truck stops and over the last two years, "we're now in over 500 third-party retailers. That's how we're bringing the company back," she said.

Travelers not near a Stuckey's or a Stuckey's retail partner can find everything from pecan logs to coffee mugs, t-shirts and clocks (and a lot more) on Stuckey's website, and Stephanie this week started work on Stuckey's first candy catalog in more than five decades.

"When it's your name up there and it's your family, there's an emotional connection that you can't separate from." Stephanie Stuckey, 3rd generation Stuckey's CEO

Stephanie's long-term vision doesn't rely solely on developing retail relationships. She would also like to bring back some of Stuckey's formerly iconic blue rooftop locations. The company currently has 65 locations, each of which operate independently. "Of those, only 25 are standalone stores, and of those 25 only 16 are the traditional stores that people recognize," she said.

Stuckey's isn't actively seeking new franchisees or licensees for standalone stores, with one notable exception: Bringing back onboard Stuckey's locations that over the course of a generation or more have left the brand.

"Here's the crazy thing: There are like 100 Stuckey's out there that are not operating as Stuckey's but they are fully operating as gas stations," she said, noting these locations had sentimental value. "They're just operating as another business, but they've got the traditional roof – some times those roofs have changed color – they all have fuel companies affiliated with them. They're turnkey ready."

In the annals of history, Stuckey's might not make the page set aside for truck stops, but Stephanie said serving professional drivers is a big part of what built the company. "We love truckers," she said, noting that some large fueling stations don't allow semis on their property. "We welcome truckers in the handful of stores that we have."

"Back in the 1950s and 60s, when we were being founded, there really wasn't what is known today as a truck plaza," Stuckey said, adding the company at one point owned the trucking company that moved goods to its more than 350 stores. "You didn't have these large square footage establishments on the side of the road. Frankly, Stuckey's was it for many years."

Stuckey's does currently operate locations in Texas, Oklahoma and Georgia that are what Stephanie called "full blown travel plazas."

"We have a couple of stores that are large truck stops that have the whole bank of diesel pumps; that have truckers' lounges; that have showers," she said, adding that the Jones Petroleum location in Jackson, Georgia, is the largest travel plaza in the state.

Stephanie said her goal isn't to rebuild her family's empire of gas stations and travel centers. More than anything, she hopes the resurgence of Stuckey's will build a community.

"Our brand is about getting on the road, and we want to celebrate that experience of traveling America's highways. We're especially associated with small town America," she said. "My vision is that we are a part of elevating road travel and celebrating that, and we become a nationally recognized brand for our snacks and candies and that we have a handful of destination locations that are really special; that people will go out of their way to visit. Any worthwhile endeavor is about building community. It's about making connections with people."

In her effort to revive the business, Stephanie said she spends a lot of time talking to travelers, including truck drivers, to understand "what makes them tick," and how she can drive the company forward to serve its communities.

"Some of the things I learned – I mentioned I have this vision of this handful of Stuckey's oasis stores that I definitely want to be welcoming to truckers, even though they might be small. Part of that is I want to have dog parks," she said. "I realized how many truckers have dogs and I wouldn't have known that had I not started talking to truckers."

When she's not road-tripping and connecting with travelers in-person, Stephanie is active on social media including Twitter and Instagram, where she posts photos from her various stops and nostalgic looks at her family's business. 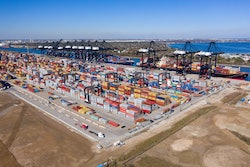