Imagine stepping into a rental car that’s dirty and not exactly running in top condition. Your mood sinks but the clock’s ticking so you hit the road while thinking of going with another rental company next time.

As a survey indicated for U.S. Xpress (CCJ Top 250, No. 16), it’s not much different for truck drivers who ranked clean and dependable rigs high on their wish list. To help meet those expectations and stand out from competitors, the Tennessee-based carrier launched their Road Ready Promise program, which relies on a system of checks, balances and rewards to help ensure that trucks stay clean and mechanically sound, or “road ready” as the recently launched program describes.

For the roughly 3,000 drivers at U.S. Xpress, 1,000 of those are slip seat drivers that typically get a different rig at the terminal for every shift. For them, the Road Ready crew cleans each truck regularly at the terminal. Crew members also look over the truck and report mechanical issues as a backup to driver-required inspections.

U.S. Xpress’ 2,000 or so first-seat drivers can also count on getting a Road Ready truck when being assigned a rig. Since they’ll mostly be out on the road and away from a terminal where Road Ready crew members are based, they can get help tidying up their truck if needed through a vendor contracted with U.S. Xpress.

But it’s a two-way street. After getting their truck detailed, drivers are expected to hold up their end of the promise by helping keep their truck clean and by staying on top of inspections to help deliver better uptime.

Since kicking off in December, Road Ready Promise is already getting impressive results.

“So far things are working really, really well,” said Clayton Kibler, U.S. Xpress senior vice president of dedicated operations. “Drivers have noticed a distinct change. We've received a ton of great feedback and crew members really like it because they're interacting with the operations teams there on site as well as the drivers they're seeing between shifts every day.”

More interactions lead to more awareness of drivers and trucks at time when both have become more important factors during a freight surge and tight labor market. So far, the driver satisfaction rate with Road Ready Promise has been climbing.

“Our first month we hit 95% [driver satisfaction], which we consider pretty good not knowing how our trucks were going to perform,” said Sarah Page, U.S. Xpress senior manager of dedicated projects.

“[For February] we've hit nearly 97%, so we're really excited about those numbers,” Page continued. “We're seeing them grow. We're very excited to see ourselves continue to make this thing better.”

Folks in recruiting are getting excited, too. The clickthrough rate for the Road Ready ad is double what they’re seeing on a normal dedicated ad, Kibler said.

“It’s performing very, very well,” Kibler continued. “We're being told that it’s better than anything that we've ever had in an ad before. People are interested in the Road Ready Promise and they're clicking through to understand more about it.”

“The way this thing really started was we sat back as a leadership group and were talking through…what is different about us from our competitors,” Kibler said. “What we came down with was that there was really nothing much different from what we did than our competitors.”

That needed to change so the group began brainstorming and leaned on their outside marketing team for help.

“Overwhelmingly, one of the things that came back as important to the driver force in general was equipment,” Kibler continued, "and that's what really led us on this journey to do something different that would differentiate ourselves from our competitors from an equipment standpoint.”

The goals behind Road Ready Promise sounded great at first but as Page explained “it was one of those things that when we first proposed it was like, ‘Okay, how do we do this?’”

It was decided that each terminal would receive one Road Ready crew member to routinely clean each truck. Crew members fill out a checklist to keep up with cleaning procedures and for checking things like the cleanliness of the truck, body damage, tires, lights, wipers, fire extinguishers, tablets, dash cameras and more. Comments can be recorded on the checklist.

Crew members also meet with drivers and terminal operations personnel to discuss truck condition. Another layer of communication was added to ensure that Kibler and Page stay informed.

“Because those trucks need something, whether it's cleanliness or whether it's a mechanical touch, it is submitted through the system and managed through that process,” Kibler said. “That defect will be filled out by the operations team there on site. It then kicks to Sarah and I and then a myriad of other maintenance individuals for the terminals and our road service as well. And then we run it from there.”

To help get drivers to keep their rigs clean, U.S. Xpress introduced the Road Ready Commitment Checklist. Each slip seat driver receives the checklist prior to leaving the terminal and signs their name to the following commitment: In an effort to help my fellow drivers, I will leave my truck clean and give it a post trip inspection when I’m done.

“The driver-to-driver promise I'm excited about, too, because it's like the Golden Rule, ‘Do unto others as you would have them do unto you,’” Kibler said. “We're saying leave the truck for others as they have left it for you.”

Drivers are also recognized for keeping up with their Road Ready commitment.

“They participate in what we consider a mystery shopper program in which they can win rewards for having a clean truck,” Page said. “We’ve rewarded two drivers so far.”

When asked how he feels about driving clean trucks under Road Ready Promise, U.S. Xpress slip seat driver Jeremy Etienne got right to the point.

“I feel fortunate because it wasn't always that way,” said Etienne who’s been driving for U.S. Xpress the past eight years. “It's more pride, you know? It's more pride that you feel when you get inside the truck. You know it's been taken care of.”

Though Etienne knows Road Ready crew member Chris Sanders will regularly clean each truck at the Robert, Louisiana, terminal, he does his part to keep the truck tidy with the Road Ready Commitment Checklist. He brings his own trash bags on trips and clears the truck of any waste and personal items before ending his shift.

“I try to make sure I maintain it so I don’t make anybody else’s job hard because we are all going through this together,” Etienne said.

For Sanders, who routinely cleans 73 day cabs for slip seat drivers, detailing has gotten easier following that first round of cleaning back in December.

“Initially when I first started, the trucks were pretty messy. They were pretty dirty,” he said. “They took anywhere from 45 minutes to an hour to clean.” Now that Sanders and drivers are both in a routine with Road Ready, the trucks are staying cleaner and don’t require as much attention during routine cleaning. Sanders can now get through a truck in 20 to 30 minutes.

Depending on how much detailing is required and the weather, which doesn’t always cooperate in Louisiana, Sanders said he can clean 10 to 15 trucks during his shift.

“I average anywhere from 40 to 50 trucks per week out of this fleet of 73,” Sanders added. “I've made myself a spreadsheet that I keep track of so that I'm not cleaning the same trucks over and over again.”

All 73 trucks are cleaned within a week-and-a-half to two weeks. Efforts are paying off with drivers.

“A lot of drivers do truly appreciate everything that Road Ready crew members are doing at this location and at other locations throughout the country,” Sanders said. “It's kind of like when you get into a new car that’s fresh and smells good.” 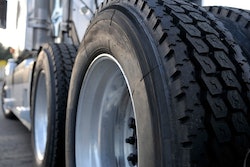 A top-tier tire maintenance program is a balancing act 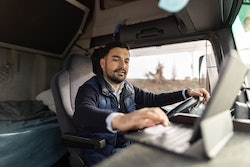 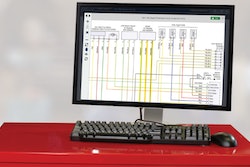 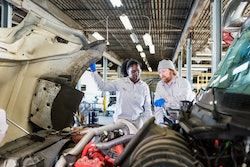