Bob Rutherford, contributor
Aug 16, 2021
Research had shown the biggest in-cab noise maker was the cooling fan. More R&D lead to the conclusion that if the cooling system was made a little bigger the fan would engage less than 10% of the time.
Horton

This is a story about diversity and culture. Not black versus white, but North versus South.

It’s about Dr. W. Edwards Deming’s philosophy of continuous improvement versus the “go along to get along" culture.

When I entered the fan clutch business in 1983 with Horton Industries the industry was a disaster. I say that with a little authority. I had been in the filtration business as a regional manager with Fleetguard Filters and with Rotomaster Turbochargers as the National Sales Manager. The problem with the fan clutch business was that it didn’t have to earn a customer’s business because the demand for the fan clutch grew out of a government mandate.

OHSA had decided that the truck cab was an official work environment and had to meet OHSA noise standards. Trucks of the day didn’t meet those standards. It was just too loud in the cab for a 10 hour duty-cycle, so a comprise was reached.

Research had shown the biggest noise maker was the cooling fan. More R&D lead to the conclusion that if the cooling system was made a little bigger the fan would engage less than 10% of the time. That little bit of run time met OHSA noise standards and every truck builder made a fan clutch standard equipment.

Everybody got a piece of the action. Horton Industries, Rockford, Bendix, Kysor and Schwitzer all benefited from the government mandate. From 1983 up until the late 1990s was the Golden Age of “fleet pull-through selling,” especially in the fan drive business. A fleet manager could select almost every component that went into his truck during that time.

I will never forget calling Shannon Scott of Poole Truck Lines. I remember setting up the appointment. Shannon said, “You actually want to come visit me and talk face to face?”

“Let’s just say we will have a full agenda when you get here,” Shannon said. I called the home office in Minneapolis. I needed the full history of our dealings with Poole Truck Lines. The sales secretary said there is no file on Poole.

I showed up for the appointment and was shown to Shannon’s office. Before we shook hands he looked at his watch and announced that I was 97 years early for my appointment. “Son, Horton is on our 100 year list. You’re 97 years too early for us to ever do business with you,” Shannon said.

I told him I had called the office and if there was a file on us working with him it’s gone. "You want me to leave or do you want to tell me what happened in the past and see what the future might hold?"

He ordered us some coffee and asked me what it was like working for a bunch of "know it all yankees" – his words, not mine. I was the first field sales rep that was not based in Minneapolis. The person before me would fly into Atlanta once a month, handle distributor issues, maybe make a fleet call with a distributor sales rep, tell customers how stupid they were, and then fly back up North. Again, not my words.

I didn’t know my predecessor, customers and prospects would tell me things. Many of my sources of information I had already worked with in my turbocharger days and had an excellent relationship with.

I told Shannon I might get the Horton yankees (yes, I said Yankees) straightened out in a year or so. That statement was the ice breaker. Shannon pulled out a very thick file folder with $25,000 dollars of unpaid warranty claims. When he was using Horton fan clutches he had bearing failure after bearing failure. He turned them in to the distributor. The distributor turned them in to Horton. Horton rejected the warranty claim.

This went on for a long time until Poole Truck Lines ordered new trucks with Bendix fan clutches on them. The Horton problem became someone else’s problem when the trucks were traded in. I took the file, scheduled a visit to the distributor and said I would be in touch.

At this time I enter the world of trucking industry logic. Remember Alice in Wonderland? It was like that. The diagnosis of the bearing problem was based on the noise that was pinpointed to be coming from the fan clutch. It made a rattling sound – the sound a bad bearing makes. The clutch would be sent in for warranty, be taken apart, and low and behold, no bearing problem.

Here’s what makes an industry a disaster: The distributors were not trained to troubleshoot warranty claims and performance issues. The sales staff couldn’t do it, and there was no training department. Today, the fan clutch industry continues to be a disaster because, in my humble opinion, based on R&D projects at Auburn University’s Transportation Institute on fan clutches, the industry has little interest in adapting artificial intelligence to fan clutch performance. But, that is another column for another day.

Remember, as stated earlier, if a customer took the fan clutch apart to troubleshoot the problem, the act of troubleshooting would void the warranty.

So after $25,000 of circular logic, instead of filing for a Horton fan clutch warranty replacement, Shannon Scott would trade in the Horton fan clutches for Bendix reman fan clutches from a different distributor. I had to hand it to Bendix. They would take anything for a core. The Bendix design was a spring engaged clutch, which meant a fleet could replace the Horton failure and not even hook up the controls to the fan clutch. Often the mechanics couldn’t figure how to reverse the control system. It would act like a direct drive and run all the time. That was against OHSA rules, but no one was checking, and most drivers couldn’t hear anyway so what was the harm, right? That was the logic of the day.

I was the new guy on the block at Horton. I hadn’t dealt with that many fan clutch issues, so I was asking around what would make a fan clutch be suspected of having bad bearings when it didn’t have a bearing problem?

I had two weeks of training at headquarters and at the factory. I rode with a couple of salesmen calling on their customers. Spline rattle was never mentioned.

The people at the factory who trained me were no help. None of the fleet mechanics were of help and the distributor that handled the Poole account said they just followed company policy and knew nothing.

I did have a little luck. A few of the failed fan clutches were still in the core bin at the distributor. I was able to take possession of those used failed fan clutches and take them to Al Roberts of Turbo Diesel & Electric Systems in Atlanta, which I did business with in my turbocharger days. This was someone I worked with doing turbocharger failure analysis in another life and time. He not only had a rebuild shop, but a complete machine shop. The thing I really liked about Al was he was crazy enough to go along with my Dr. Deming inspired schemes for continuous improvement for the trucking industry.

We took the fan clutch apart, and sure enough no bearing problems. We kept taking parts apart and found the spline mechanism. It was totally worn out. It worked but under certain circumstances, at just the right engine RPM, it would rattle and sound just like a bad bearing.

I called Horton’s warranty and engineering departments and was beside myself. “Why didn’t you tell me about this spline rattle issue?”

“What’s there to tell," they said. "The spline gets worn, and under certain circumstances it rattles."

“Don’t you think we should have a TSB on issues like this? We can’t just lose customers," I yelled into the phone.

“What’s a TSB?” I explained what a technical service bulletin is and why we needed to issue one on spline rattle.

“Bob, I don’t think marketing would go alone with telling people about problems with our product, but you might bring it up,” one engineer suggested.

A few weeks later I was at my first Horton sales meeting in Minneapolis. It was sort of like a Connecticut Yankee in King Arthur’s Court, but the opposite.

The President of Horton, along with all the department heads, attended a cocktail party at the end of the first day of the sales meeting. As the new guy, I was told to only speak when spoken to.

However, the president of Horton sought me out and asked me what Horton could do to make my job easier in the field. I told him you have got to fix the spline rattle problem. He had never heard of it, so I gave him a detailed explanation of the problem and why it had never been addressed. I also explained why we had to address it, and address it now.

I love the power of a live demonstration, something I learned from the movie “Deal of the Century”.

To really emphasize my point, I told the president I was going to put some ball bearings under his hub caps. Like spline rattle, the balls rattling around in the hub cap will only make noise under certain conditions. When you slowdown for a stop sign, your car will sound like something bad is happening and people will look at you like you’re crazy for not getting your car fixed. I mean, who would put up with that racket?

The president called over the head of engineering and asked if knew about this spline rattle problem. He confirmed everything I said.

The president told him to make this fix a priority and that he didn’t want Mr. Rutherford screwing with his new car before he flies home. The funny thing about the president’s brand new car, it was cutting edge – a VW Diesel Rabbit. The thought of someone messing with it tripped a wire in his brain.

I knew about his car because when personnel asked me what kind of company car I wanted to drive I told them I will drive what the president of the company drives. That’s a yankee car. I told them I needed a southern car like a Trans Am or a Dodge minivan. I either want to go very fast or haul a lot of training and sales materials. 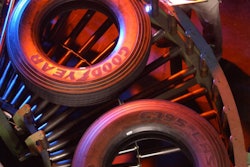