'Trucking has lost its buffer': As Mayor Pete testifies for DOT head, a look at how Dem control in D.C. might change trucking

Jason Cannon, CCJ chief editorJames Jaillet, CCJ executive editor
Pete Buttigieg on Thursday made his first appearance in Washington as presumptive incoming head of the Department of Transportation (DOT). The former mayor of South Bend, Indiana, testified for three hours before the Senate's Commerce, Science and Transportation Committee – the first step in the process of the Senate confirming him as the next Secretary of Transportation.

The hearing was mostly congratulatory and speculative, and on nearly every topic related to trucking, Buttigieg took a wait and see approach. "We'll look into it," he said on questions about potential further hours of service reforms and pilot programs paused by President Joe Biden on his first days in office. Likewise, Buttigieg gave the same answer on questions about ongoing waivers from the ELD mandate for livestock haulers and exemptions for interstate motor carriers from state-enacted meal and rest break laws for drivers.

“We’ll take a closer look and engage with stakeholders to understand how the pilot program [on expanding split sleeper berth options] squares with the goal of worker and traveler safety, and with the goals of flexibility,” he said in response to a question from Sen. Deb Fischer (R-Nebraska).

Fischer and Sen. Jon Tester (D-Montana) also encouraged Buttigieg to ensure that livestock and insect haulers continue to remain exempt from the electronic logging device mandate. Congress so far has been the body to grant those annual waivers, but they seemingly were encouraging Buttigieg to make it a permanent exemption via the regulatory process, though they didn’t explicitly say so.

Lastly, Buttigieg talked highway funding in several rounds of questions. Short-term, he said, Congress should consider raising the diesel and gas tax to fund road projects, as the Highway Trust Fund has continually needed infusions from the general fund to remain afloat. Longer term, he said, Congress should consider other funding mechanisms, such as a vehicle-miles tax, to fund roads and bridges.

“In the long-term, bear in mind that as vehicles become more efficient and as we pursue electrification – whether sooner or later – there are questions about whether the gas tax can be effective at all,” he said.

The fuel tax has funded the U.S. Highway Trust Fund since the 1950s but more fuel efficient vehicles, and a nearly 30-year gap in raising the per-gallon federal tax rate, have eroded the tax’s ability to properly fund the Highway Trust Fund.

Buttigieg's presumed ascension to the head of the DOT could spell the end to several initiatives that kicked off in the latter part of the Trump administration, said Avery Vise, FTR vice president of trucking .

"I think we can probably say goodbye to the pilot programs that were announced in the last few months,” Vise said of the Biden DOT.

On the chopping block could be the proposal for drivers to pause the 14-hour on-duty window (beyond what's allowed in the Sept. 29, 2020-enacted HOS overhaul), a pilot that allows CDL holders under the age of 21 to drive interstate, and additional split-sleeper options announced just last week.

A rule to institute new driver sleep apnea screening regs will likely be back on the table, Vise said, along with mandated speed limiters and returning Compliance, Safety and Accountability (CSA) scores to public view.

“I think one of the first things that we’ll probably see is the restoration of the public scores," Vise said. "Frankly, I think that’s likely to happen regardless of whether we get the [Item Response Theory] addition to CSA or not.”

In December, FMCSA ruled that third-party skills test examiners could administer CDL skills tests to applicants the examiner also has trained. Vise said that allowance, too, is likely to be terminated and conversations on raising carriers' minimum insurance requirements are likely to heat back up.

The American Trucking Associations (ATA) late Thursday threw its support behind Buttigieg, with ATA President and CEO Chris Spear urging the committee "to swiftly report his nomination favorably to the full Senate for consideration."

“As he conveyed throughout his testimony [Thursday], greater federal investment in infrastructure is critical to enhancing transportation safety and growing our ailing economy," Spear added. "That work begins with securing immediate funding to address our short-term needs over the next decade while we develop new, technology-driven solutions over the long-term, and ATA stands ready to assist the Biden Administration in advancing a robust highway funding bill across the finish line.”

Stakes in a presidential election are generally always high, but the battle between largely business-friendly incumbent Donald Trump and eventual winner Joe Biden was one for the ages.

Yet, while the stress and drama at times were high, a new person living in the White House might not impact stakeholders as much as they fear, Vise said – at least in the near term.

"We’re looking at a 2021 that to us looks like a very good year for trucking, and frankly I don’t think it would look any different depending on the outcome of the election," said Vise.

There, of course, could be consequences with environmental and labor policies. The Department of Labor – specifically how it decides to define an independent contractor – could have the biggest impact on trucking. With regard to labor, Vise noted that California has already been pushing a somewhat Democratic agenda, "so I’m not sure that even [changes to labor standards] are going to be so dramatic," he said. "We were already seeing the leased owner-operator model under attack at the state level, even during the Trump administration – certainly it was even more so under the Obama administration.”Speaking specifically about the economics of trucking – putting regulation aside – Vise noted "I really don’t think it matters all that much [who is president]. In terms of how it affects market conditions, we just don’t see that over time. We see strong markets in Democratic administrations. We see weak markets in Republican administrations, and vice versa. It really has only a marginal effect on what you can expect.”

"We’re looking at a 2021 that to us looks like a very good year for trucking, and frankly I don’t think it would look any different depending on the outcome of the election." FTR Vice President of Trucking, Avery Vise

“I wouldn’t characterize most of it as being dramatic," Vise added of the flip from a Republican administration to a Democratic one. "I think it is going to be on the margins. I don’t think it’s going to have much affect on 2021. Might have some affect next year.”

The White House isn't the only building in Washington that saw significant turnover. For the first time in a decade, Democrats hold presidential power and both chambers of Congress.

A Democratic-controlled Congress, Vise said, is the "wildcard" as it could impose trucking regulations on its own. However, he said, a tight split between the majority and minority are likely to keep any controversial topics – like minimum insurance requirements has shown itself to be – on the shelf unless, Vise said, it’s tacked on as a rider "on some must-pass-legislation.”

"Trucking has lost its buffer," he said. "At a minimum, even though the committees will be split 50/50, they’ll still go to the floor, and what goes to the floor will get decided by Chuck Schumer and not Mitch McConnell and that is a huge, huge difference.” 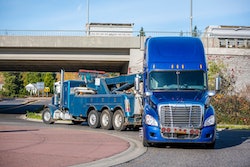 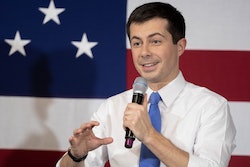