Investing in a SaaS-based TMS could reduce costs long term

Trucking companies have been attacked by inflation in recent months, which has been offset by higher market rates. While inflation has seen a small dip, higher prices aren’t going anywhere for now, and with consumers cutting back on spending, the lessening demand for freight capacity is now lowering market rates, rounding out a not-so-great financial picture for carriers.

Though fuel prices have fallen slightly and the industry’s labor market is softening, costs remain high. But there’s one additional cost experts are recommending to help carriers ultimately save money amid the squeeze of mounting financial pressures: a shift from a server-based transportation management system to a SaaS-based system.

San Diego-based Pasha Automotive Services, a fleet of 100 owner-operators that provides port-processing and automotive logistics for new and preowned vehicles, recently switched to a SaaS-based TMS, and it’s saving the company time and money.

The company switched to Magnus Technologies SaaS-based TMS in Fall 2020.

“With the old program, we had to manually enter each and every order. It was very tedious, very time consuming, very inefficient. It did not have an electronic-proof delivery system for the drivers to use that went along with it,” said Jason Cook, Pasha’s head of operations. “We were able to cut staff … nobody likes to do that … just from the efficiencies that we had. We shed people because we started finding out that we had people sitting around because all the jobs that they did before were no longer valid or needed. We just got so much more efficient.”

The carrier’s staff efficiency increased by 24% since adopting the Magnus TMS, which helped it improve data management processes and automated workflows with complete, one-click access to load, truck and driver information.

Cook said the system allows for electronic delivery of receipts to customers, and that auto delivery eliminated manual reports, making it possible for dispatchers to double their driver count from 20 to 40 without compromising quality. The Magnus TMS also automates order entry and invoicing, reducing keying errors and unnecessary paper trails.

Cook said the system also allowed Pasha to scale up and work with larger-volume customers.

Magnus Founder and CEO Matt Cartwright said despite the current economic downturn, investing in technology like an SaaS-based TMS can help carriers build a scalable and automated process that allows for higher yield when business picks back up.

“The people running these businesses know you can't live in a time of inactivity. Simply not knowing what the endgame is can't be a crippler to your action,” he said. “If you're concerned about it, it's a lot easier to inject new technology, especially the SaaS-based. We don't have a lot of upfront costs, whereas on-premises (TMS) are going to be big upfront costs, big effort; you may not see the payback for quite some time.

“With the SaaS-based platform, you can implement those solutions and take control of the destiny regardless of what happens to the economy. You may see some growth, and in that, you input great technology that lets you improve your yield across your entire business. And if you do see things dip, you've now deployed a solution that allows you to scale back where you need to without it being crippling.”

There are many benefits to the SaaS-based system as opposed to an on-premises system.

Cartwright said there are several major differences in SaaS and on-prem, but he likes to consider six primary buckets: availability, backup/restore, futureproofing, interoperability, extensibility and security.

With SaaS, availability allows for easier and automatic scale. A carrier doesn’t have to buy new servers or get additional licensing and backup; it all grows simultaneously, allowing the company to get larger without the pain points of scale. Cartwright said it also benefits larger carriers that have integrations with multiple partners and customers to scale without too much downtime compared to an on-prem solution, whose infrastructure is difficult to build.

With SaaS, backup and restore is much more reliable. With on-prem, he said backups happen maybe weekly or even monthly, allowing a bigger potential for data loss, whereas SaaS backs everything up every five minutes via cloud processing. He said recovery time is better, too. With Magnus, the max data loss potential is five minutes, and system restoration can be done from the ground up in a totally separate environment in less than four hours. With on-prem, he said there is also the possibility for catastrophic events like a fire. How would you recover the hardware then?

The third bucket is futureproofing. An SaaS solution makes it easy to upgrade, preventing stale technology that leads to security risks and allowing for easier leverage of new technologies that help the system run faster and better.

Next is interoperability. Magnus’s applications are heavily API-based, allowing for easier integration of applications as opposed to building a piece of middleware that sits between an on-prem solution and the rest of the people who want access to that data. And middleware is somewhat brittle, Cartwright said, because it's not aware of both parties and doesn't have the dynamism to handle upgrades to the core application.

So Magnus deploys software across the entire platform about once a month, whereas on-prem solutions may be due once a year and sometimes once every five years, which makes upgrades difficult and training on those upgrades less digestible.

And the final piece is security.

With an SaaS solution, penetration tests are being run all the time, which doesn’t happen often with an on-prem solution. Using the SaaS solution allows a provider like Magnus to handle security, whereas carriers don’t often have a full-time, on-site security team for their on-prem systems.

Dan Popkin, sector vice president of global connected supply chain at Trimble, said the security factor is often the biggest driver of SaaS TMS adoption, and he is seeing more carriers on the SaaS track.

“I find that that transportation tends to be a lagger with technology … but we're starting to see the more forward-looking carriers that are taking note,” Popkin said. “I would say we're at the start, but it's moving quickly. We are at an inflection point because I'm seeing more and more smaller customers that are wanting to move (to SaaS).”

He agreed with Cartwright that other big factors beyond peace of mind, include not having to maintain servers or hardware when it comes time for upgrades that are much more expensive with on-prem TMS compared to highly predictable subscription models.

Overall, Cartwright said subscribing to the SaaS model ultimately creates efficiencies at every level of a carrier’s business, and it takes the management of the system off their plate, allowing them to focus on the actual trucking business.

So during inflationary times, he said it’s smart for a carrier to invest in technology despite the instinct to hold onto cash and cut spending because investing in a SaaS-based TMS can permanently reduce the cost of doing business amid temporary fluctuations in the market. 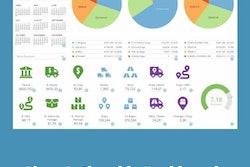 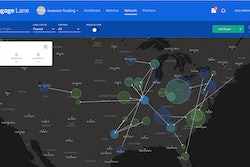 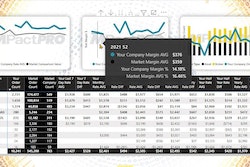 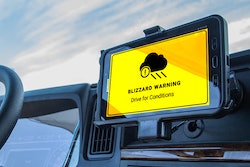