The used truck market in the first half of this year has started to cool off from the white hot levels seen dating back to early 2021, when prices set their sights on six figures for models that were upwards of four years old.

Carriers that took on used trucks in 2020 at the height of the pandemic could have disposed of those same assets two years later for a rate of return that might have outpaced every financial index on the planet, and was on par with the Dow Jones Industrial Average.

Three- to five-year-old trucks retailed for an average of 1.7% less money in May than April, according to J.D. Power, but this age group brought 82.6% more money in the first five months of 2022 than the same period 2021. Year-to-date, late-model sleepers have increased an average of 1.7% per month in value.

CCJ recently obtained and analyzed truck retail figures from Price Digests, a company owned by CCJ parent Randall Reilly, to determine depreciation rates from when the truck would have been bought new, and how much that same model has grown in value from June 1, 2020, to June 1, 2022. For each model, Price Digests pulled what would be considered a common fleet spec with minimum factory options.

"Class 8 auctions are starting to feel more like pre-pandemic times. Volume is up somewhat, with a substantial number of higher-mileage trucks selling for unimpressive money," said Chris Visser, senior analyst and product manager of commercial vehicles at J.D. Power. "That said, pricing for the typical sleeper tractor is still more than 50% ahead of 2021, and the newest units – as well as those with lower-than-average mileage – are still commanding very strong money."

Recent data reflects a rising number of operating authority terminations among owner-operators, but a corresponding climb in overall truck transportation employment (May was actually the highest month in recorded history for that sector) suggests many of these new owner-operators could be going to work for fleets, or that fleets are hiring drivers at a rate roughly equal to owner-operators leaving the industry. Combined with the precipitous drop in freight rates, Visser said transportation current paints a picture in two parts.

"If truckers aren’t leaving the industry in droves, why are truck prices dropping? As we’ve said before, market shifts don’t require a major change in used truck supply. For example, in the pricing downturn of 2019, the volume of trucks in our auction benchmark group increased by only about 1,000 units during the entire peak-to-trough period. Remember, it’s not just the number of trucks available, it’s the number of trucks available for the freight economy we’re in," he said. "If your customers are mainly small fleets and owner-operators who operate in the spot market, you’re hearing the sky is falling. If your customers are mainly larger fleets who operate in the contract market, you’re hearing conditions are still strong. Used truck supply and pricing will continue to reflect the reduced demand for spot freight as well as more typical expectations for capacity needs in upcoming quarters." 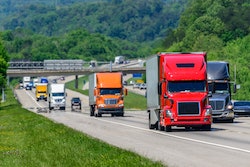 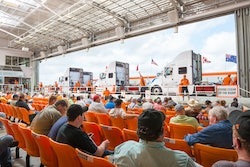 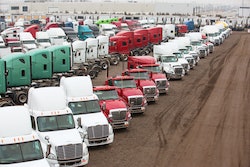