Jason Cannon, CCJ chief editor
Jul 29, 2021
There's been increased emphasis on making training fun (gamification) over the past several years, especially as it relates to fleet managers' quest to squeeze more safety and efficiency out of drivers.

Fleets often use technology platforms that focus the attention of managers and drivers on pulling the fuel efficiency of the lowest performers up to the fleet average. TruckLabs CEO Daniel Burrows said this strategy often pits apples against oranges, and for drivers it's no fun playing a game they know they can't win.

"People like to engage in goals when they're achievable and, with some focus, they can get some early wins. If you're saying, 'I'm pulling 7 miles per gallon and the goal is 9 miles per gallon,' you're like, 'There's no point. I'm nowhere near that,' and you disengage," he said. "Say you've got one driver who's an excellent driver but his mpg looks really low," Burrows continues. "Well, it turns out he's an excellent driver and he gets heavy loads over the Rockies all the time and he's doing really well to hit 6.5 miles per gallon. It's like 'well done. You should have been getting around 5 (mpg).'"

"We understand the terrain, the equipment, the weather, the load you're pulling, and we put you against a sort of cohort of other drivers that's a fair measurement," Burrows said. "You're not being compared against a flat, light load. We actually compare like-to-like."

Today’s driver mpg performance measurement approaches often lack comprehensiveness, Burrows said. They often do not account for variables like weather, traffic, terrain, and other driving conditions, nor do they provide periodic feedback such as every week or month after drivers have completed extended routes.

TripDynamics puts the driver in control of their own performance because a driver can see how their skills fair against an average and a given segment's top performer.

"You enter a segment. It's basically a small game – it's like 60 miles. You see a terrain profile that you're going to be driving and you see how well you did the last time you did that terrain. And you also see how well other drivers that are using similar equipment, facing similar conditions, with a similar load ... and then it's like, 'game on. Who can do better?'"

Driver performance is then ranked, segment-by-segment and run-by-run, to show individuals how their performance is improving both against their own past and their peers. TripDynamics also provides live, actionable, in-cab feedback to drivers, such as driving tips, equipment utilization, and terrain strategy, all while they still have time to make adjustments to improve miles-per-gallon performance rather than at the end of the week or month when it’s too late.

One of the advantages of tracking efficiency this closely at the driver level, Burrows said, is that it  can reveal that drivers who are consistently below the fleet average may have a good reason, and they may actually be performing at a higher level than their peers in that same lane. It can also reveal maintenance issues. If a fleet sees the mpgs of a driver who's normally fuel conscious begin to slide, it might be time to check the equipment. 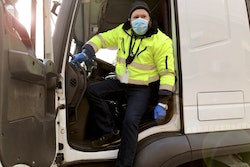 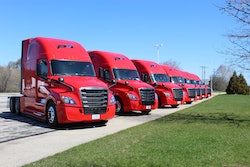 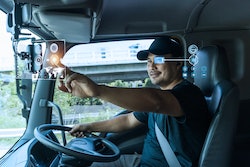