Pre-COVID 2019, I had the opportunity to meet with regulators, start-ups, material providers, utilities and state and regional government purchasing planners at several events.

I sensed a firm conviction from many that all the zero-emission trucks you could order would be available by today. They had been convinced by announcements from start-ups about how fast production would ramp up and convinced that the number of models being offered somehow would translate into real trucks coming out the door.

I even had an electric motorcycle manufacturer tout that EV companies could move much faster at launching products than manufacturers of internal combustion engines. Their eyes rolled and glossed over as I tried to explain the differences between taking orders and actually making production-level trucks. NACFE went so far as to publish its collective experience and thought leadership in a report in January 2020 titled Defining Production.

Here we are today in the Spring of 2022, and while there are reportedly more than 140,000 orders for zero-emissions Class 2b-8 vehicles, as of last December, CALSTART reported there were only about 1,250 ZEVs of all classes registered in the U.S. The massive show floor at this year’s ACT Expo was packed with ZEVs, battery electric, hydrogen fuel cell electric, hybrid electric, even a diesel-like engine that runs on hydrogen.

In Class 8 alone, I counted more than 10 manufacturers with ZEV offerings. Many of the sessions I attended talked about the new ZEVs going into production this year. NACFE’s position that many duty cycles are ready for BEVs today is described in detail in three reports published this year on terminal tractors,  vans and step vans, and the most recent, heavy-duty regional haul. The fundamental need is still there: manufacturers need to make the trucks.

This last year we’ve seen just how challenging it can be to make and deliver vehicles. Every single manufacturer was impacted by a series of unpredicted challenges; from COVID, to container ships backing up at ports, from mispredictions of market demands, from slow downs in key raw material supplies and key components. Orders taken were delayed or canceled. Fleets saw cost increases on the trucks they were ordering. Used truck residual values went up with a decreasing supply of trucks and a greater demand because new trucks were less available. Spare and salvaged parts became valuable as supply lines were challenged to get new parts.

Order backlog has long been a metric used to forecast business activity, but it can be very deceptive. Plant capacity often limits how many trucks can be built in a given year. Once a factory introduces two or three shift operations, and does all it can to implement process improvements, at the end of the day it can still only make so many trucks. Once the order book has filled out for a year, orders going into the next model year are riskier for both manufacturers and fleets.

At some point, it is best to just stop taking orders entirely. We see this with the Ford Lightning F-150 as an example from the light-duty side, with order books filled three years out already. A decade ago, early Tesla buyers were accustomed to waiting several years for their cars.

Commercial fleets are not all that patient. Commercial vehicles are capital investment tools. They wear out and need replacement. Fleets don’t have the luxury of patience.

ACT Expo 2022 got me thinking about numbers, specifically production ramping. Let’s assume there are 10 manufacturers producing Class 8 on-highway day cabs. That market traditionally sees about 40% of the annual production of Class 8 vehicles. In a great year when OEMs pump out 300,000 Class 8 vehicles, 40% would be 120,000 new day cabs a year. Divided evenly among 10 manufacturers, that means 12,000 vehicles each. Divided into 12 months of production, that’s 1,000 vehicles each OEM per month. A daily output might be 50 ZEVs per day. Not too daunting a number, really.

A consistent message from ACT Expo panelists, however, was the need for the purchase price of ZEVs to become lower. A couple manufacturers that are not yet in production have estimated they can make a Class 8 BEV at near parity to a diesel, but the majority of estimates I’ve reported on show the list price of these vehicles can be two to three times higher than that of a diesel vehicle. The fuel cell ones may cost even more. Grants, incentives and credits often bring the out-the-door pricing back in line with the diesel, but those are not long-term solutions.

So, where are the opportunities to reduce the costs for ZEVs? Supposed experts (typically outside the industry) point to the miracle of high-volume tooling reducing part prices. While this is a well-established tenet in manufacturing, the volume increases needed for cost reduction are significantly greater than building 12,000 units per year.

Take a look at some example automotive factories as reported by MotorTrend back in 2012. The Ford Kansas City plant produced 460,338 cars in 2011. Their Dearborn, Michigan, plant produced 343,888 cars. In Montgomery, Alabama, Hyundai produced 342,162 cars. Nissan in Smyrna, Tennessee, put out 333,392 cars. Toyota in Georgetown, Kentucky, manufactured 315,889. The GM facility in Arlington, Texas, did 269,624. Of the 15 automotive plants cited in the article, the average production rate per plant was 305,367. Essentially each automotive plant produced the same volume of vehicles that the entire heavy-duty truck industry did in 2018.

Price breaks for heavy-duty trucks due to volume are challenging to find. You find them by repurposing and reusing existing parts from other models. Frame cross members, cooling modules, suspensions, axles, connectors, etc., are frequently spread across several models increasing their net volumes. Some of these are shared across multiple manufacturers to further gain volume pricing breaks. However, brand identity often limits the types of parts that can be shared in this way.

Which brings me back to ZEVs. How does the trucking industry get volume up to help reduce costs? The opportunity is in standardizing things like battery packs, motors, controllers, harnesses, etc., but doesn’t that risk creating monopolies, raise the fear of price gouging, and raise the fear of limiting innovation?

All of those are valid concerns, however, we are in extraordinary times where ramp speed is critical in helping meet sustainability commitments. The clock is not in our favor. I’ve equated this situation to a war; a need to do things differently. A precedent exists in how countries like the U.S., Canada and Great Britain faced World War II production.

How did the U.S. manage to build so many aircraft and tanks in World War II? One technique was standardizing a configuration and then licensing manufacturing to multiple companies. The Boeing B-17 Flying Fortress four engine bomber and the Consolidated B-24 Liberator both were built in volume by former competitors and others. This is true also for the iconic M4 Sherman tank. Standardizing on designs meant multiple manufacturers could produce the same product, or nearly the same one.

Look to the ubiquitous AA battery as a starting point. The interfaces are standardized allowing multiple manufacturers to make interchangeable product offerings. What if heavy-duty battery packs all came from the same design, or the same configuration? Would that increase volume?

ACT Expo had a large number of hydrogen fuel cell alternatives. What if the hydrogen tanks were all identical? What would the volume savings potential be? What if the entire fuel racks were identical?

There are obvious challenges in standardizing components and systems, from liability, legal, and economic perspectives. The numbers for each OEM to produce their 12,000 units each year do not show promise for cost reduction. For example, even if one manufacturer captures 50% market share, we’re still only talking perhaps 60,000 battery packs per year at the vehicle level at one per truck or 180,000 total at three per truck.

Industry and government need to find solutions for rapidly getting ZEV costs down. There are many creative and skilled people in the trucking industry. Open the door to think outside the box and see what these groups can do to revisit what may have worked in the past in terms of dealing with challenges on a national scale. 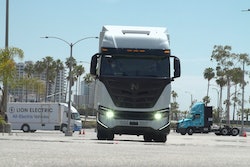 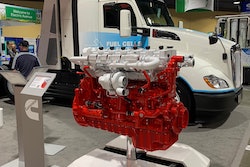 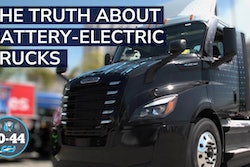