Carlbaum also shared impressions of his first and last trip to the Advanced Clean Transportation Expo in Long Beach, California. Due to record attendance this past May, the show will be moved to larger venue in nearby Anaheim.

Battery technology remains the driving force behind truck electrification and not just when it comes to moving a truck down the road. Carlbaum talks about roles these massive batteries can play once they’re deemed no longer strong enough for powertrain use. Batteries still have plenty of life to give in other scenarios like energy storage.

Navistar is also no stranger to fuel cell technology as Carlbaum explains.

Contents of this video

For me, it's the first time of the year and it's packed. The place is packed. There's a lot of attention, national interest coming here. The number of exhibitors is just, I mean, half of them I didn't know before. So there's both, let's say the traditional ones, call it us and other major suppliers or partners in the industry, but also all these initiatives of different startups. So it's really, it's bustling. It is. I mean, I think it's almost double amount of participants compared to the previous one. And this will go on. I mean, because there's so much exchange of knowledge and partnership built up here. And I think ultimately also what's still not very present, that's the customer's presence. I mean, some very big operators are here. They are very well positioned. But I think this will kind of start attract the coming years. To get increased knowledge to build on this relationship and partnerships.

So I think this will be the point to make. The big operator here. They are very, very present, they're very integrated in this whole, let's say, value chain with all the different stakeholders. I mean, I won't mention one, so I don't forget one. But I think again, there is a lot of exploration, a lot of learning to be done here. Both in the discussion, the panels, but to be close to the different players here, all from, let's say the charging station suppliers, the component manufacturers, everybody's here. So I mean, the learning curve is quite steep now. And I think this that we have ahead of us, there's no truth in this. I mean, we're kind of exploring new terrain.

So the future will be very much more, let's say, I would call it partnership-based relationships for true and not as transactional it is in the past. So I think this move, everybody's always talked about partnership that's been there, but we need to get even tighter through the whole value chain. And events like this is just like, "Hey, you're spurring it."

The whole model around charging both. I mean, the stakeholders are utility companies, energy companies, eventually big operators. Us as OEMs, different finance or funding firms like we've already seen moving into it. So I mean, there's a big number of partnerships that are going to be established. And well, I think if we also get on top, get more, both the state and the federal authorities on board, on what is needed to put some speed in this, I think then this will start moving fast.

We're stating a lot of regulations on where we need to be on the future when it comes to greenhouse and all of that ramp up. But I mean, this goes without saying that it's not only a take, it's a give here. The private sector is moving fast. There's no need really to push us to go faster. We see this as a future. We see this where you have, let's say, both the environmental concern and the economical, let's say the business case around this. It's there. So I mean, we need to get this going also. I mean, both on the charging infrastructure and above all the grid, the grid infrastructure.

The development is going so fast, and I think we will have, let's say in the coming four to five years, there'll be huge advances when it comes to battery technology. I mean, all these resources coming in now and really going to a ultimate, let's say chemistry composition of commercial vehicles. It's happening as we speak. So of course batteries will evolve very fast. And so there is, let's say call it a circular thinking around today's batteries. The first ones that come out, first ones are many, many years. Well, there is a given second use for them. I mean, in stationary and standby and all of that, because the degradation level is call it almost surprisingly low. So I mean, there's still a lot of, let's say, capacity in those batteries that will come out, let's say in the market five, six years from now.

So we need to find a way together, all of us, and it's not like question of let's say, I would say shoveling around risk or let's say investment. But we need to all be part of this. What does the role of the OEM? The financing, the operator. And how can we get this act together is of course something that we are addressing. And over time, if you say as we go forward into this, I mean the need of stationary and standby might be covered, but then we're looking at the completely other, let's say circular economy and usage of the batteries. Because I mean, it's a resource efficiency question also. Today, we debate a lot about, will there be enough raw material, prime materials to source all of this? Of course. I mean, the batteries out there will be reused. I mean, so everything's not incremental. So this we also have to figure out the way forward.

I say fuel cell development, we need to be clear where we want to go most heavy into investment. We cannot be everywhere. Said that, I mean, there's a lot of good companies working with fuel cells and hydrogen today. We're working on a number of partnerships, some already established and some are to be established. So we can find, let's say, because all of these are also depending on a critical volume and mass. So I mean, we will not build it ourselves. It's not needed, they're good players out there. So we're like Navistar, always been successful in dealing with close partnership. But when it comes to battery, it becomes core proprietary.

So we will work with both, definitely. There will be a segment that will hardly ever be covered by batteries. Maybe. I mean, sit here and guess about that. That will be, let's say, just, I mean, it doesn't make sense. But maybe 15, 20 years away from now, batteries will be there. But I mean, in the horizon of the really need. They come in, let's say after 2030 and beyond that. Fuel cell will have its given place and we will have, let's say, established well working partnerships on that. 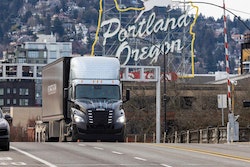 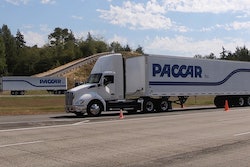 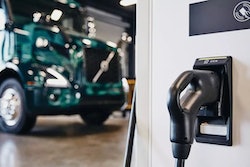 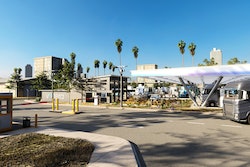