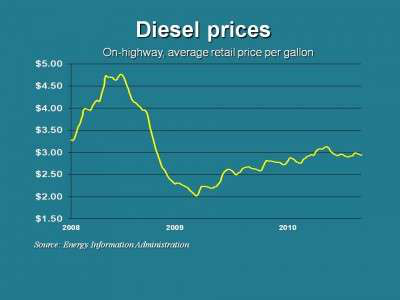 The national retail price of on-highway diesel dipped 1.9 cents to $2.938 per gallon during the week ending Monday, Aug. 30. The price of diesel, which dropped for the third consecutive week, is 26.4 cents higher than the same week last year, according to the U.S. Department of Energy’s Energy Information Administration.

Diesel prices declined in all regions except the the Rocky Mountain states, where prices inched up 0.3-cent. The Rocky Mountain region also was the only area where prices rose the week before. The Gulf Coast region enjoyed the largest price decline at 2.8 cents, followed by the Lower Atlantic at 2.4 cents.

As usual, prices were highest in California at $3.15 a gallon, followed by $3.101 in other West Coast states. The nation’s least expensive diesel by region, $2.886, was found in the Lower Atlantic region.