Polar Service Centers announced that its Phoenix location has received ASME “R” stamp certification to perform repairs on U.S. Department of Transportation-coded tanks and pressure vessels. The ASME R stamp is issued by the National Board of Boiler and Pressure Vessel Inspectors. Certification involves a detailed audit of a facility’s procedures and quality systems.

“The National Board R stamp certifies our Phoenix location to test and repair all makes of coded pressure tanks, including welding and bodywork on DOT 406, DOT 407 and DOT 412 tank trailers,” says Mike Evans, president of Polar Service Centers. “It is an important capability especially for customers in Maricopa County, which has stringent cargo tank inspection and integrity requirements.”

Polar Service Centers serves businesses that transport dry and liquid bulk cargoes, including petroleum, construction materials, chemicals and food-grade products. The company has 30 locations across the United States, and all are ASME R-stamp certified or in the process of receiving National Board R-stamp certification. 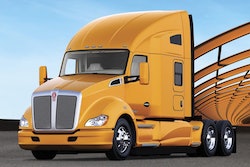