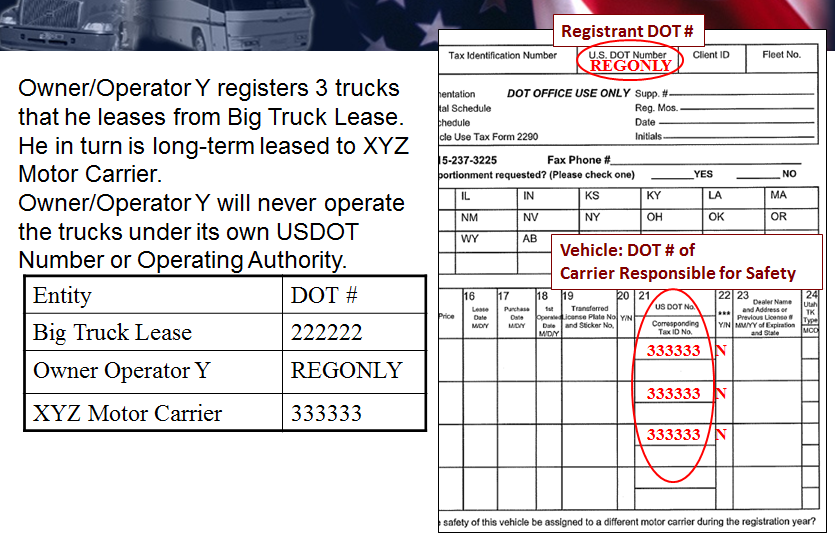 The Federal Motor Carrier Safety Administration is attempting to plug yet another data-quality hole in the inspection and crash information well for its Compliance Safety Accountability safety ranking system. In a presentation Thursday, Sept. 20, senior agency officials presented membership of the Truck Rental and Leasing Association, among other stakeholders, with plans for eliminating registrant-only DOT numbers from state-federal collaborative efforts in registration procedures for truck equipment.

The practice for registrant-only companies – typically rental and leasing companies as well as leased owner-operators getting and managing their own base plates – to be issued such a number during the vehicle registration process was eliminated Sept. 1, and the registrant-only option on MCS-150 filing forms was removed Sept. 15. Remaining active registrant-only DOT numbers are scheduled to be removed automatically on Oct. 13.

The existence of these numbers had contributed to poor data quality in the Motor Carrier Management and Information System database, where inspectors somewhat regularly and erroneously filed violations under carriers’ or equipment-providers’ registrant-only numbers rather than the correct operating authority. This allowed those violations to be left out of the CSA metric and the associated motor carrier to “evade enforcement,” FMCSA said, by flying under the agency’s radar.

“What we discovered was an accelerating trend of motor carriers registering for a registrant-only U.S. DOT number,” said Steve Parker, transportation specialist with FMCSA’s Enforcement Division, for one of several reasons:
• By mistake – A carrier sees the vehicle registrant selection on an online or other filing form and thinks they’ve successfully filed for operating authority; and
• By intent to evade – “A little more nefariously, they may be obtaining it because they’ve come to the realization that they can avoid enforcement in our Safety Measurement System,” said Parker.

Letting the number lapse into oblivion may not be, however, the only action necessary for carriers and equipment providers to take to maintain appropriate credentials. Beginning this week, the agency has begun mailing the entire universe of registrant-only numbers to notify them of the elimination of the categorization. “If you’re an interstate carrier and you’ve been one all along, then you need to make yourself an interstate carrier by updating your MCS-150 form,” Parker said.

Included in the mailing, he said, is a postage-prepaid prepopulated form that carriers and leasing companies can send back with the appropriate business-categorization boxes checked. “We did identify a small subset of the population that the FMCSA will be changing directly to interstate motor carriers from registrant-only,” Parker said. The “pretty small group” clearly was involved primarily in transport according to FMCSA records.

For carriers and owner-operators who have obtained only the registrant-only DOT number within the past 18 months – anytime following March 1, 2011 – “there was a small distinction in the letters,” Parker said, indicating that changing status to interstate motor carrier would subject them to the new entrant program and a comprehensive new entrant audit. “For those who’d obtained a number … prior to March 1, 2011, they won’t go into the new entrant program,” he said. “A lot of folks won’t be affected by this at all. If you keep your USDOT [operating authority] number active, you’ll be fine.”

Also for carriers operating intrastate, if their state requires an intrastate DOT number, they may need to file for the appropriate authority there.

For equipment and leasing companies, as well as truck dealers, FMCSA is exploring the potential for a special classification, still in vetting. Until and if that happens, Parker advised both short-term rental and long-term vehicle leasing providers that don’t know the DOT number and tax I.D. of the motor carrier responsible for safety in a particular vehicle at the time of registration to file as interstate motor carriers themselves, indicating on the form that the safety-responsible motor carrier would be expected to change in the next year.

Combined with efforts at educating law enforcement to determine the correct DOT number for recording violations during inspections of rental/lease vehicles, FMCSA hopes the registrant-only elimination may help control the raft of DataQs challenges from the leasing and rental community to violations assigned incorrectly to their operating authority.