A recent Randall-Reilly MarketPulse Intelligence survey of for-hire trucking executives found that 85 percent believe that the outcome of the November elections will make a significant difference in the health of their businesses. Although the July survey did not go on to ask respondents which candidate or party they wanted to win, that really wasn’t necessary. Survey comments made abundantly clear what you certainly would presume: The vast majority supports the Republicans. Some typical comments:

• “If we elect conservatives, business will prosper. If we continue to have the socialist-leaning regime to remain in control, look for more regulations and less ability to attract capital to purchase equipment.”

• “If we re-elect Obama, the United States will never recover from his years in charge. He has a whole new agenda for the next four years we can’t even dream up.”

• “If Obama gets four more years, the amount of regs that will be shoved down the throats of American business in order for him to achieve his dream of a unionized America that runs on wind and solar power will be the death of many small businesses in this country.”

The notion that a pro-labor and pro-environment agenda will continue and even intensify under a second Obama administration is reasonable and logical. A second term often leads to rulemaking and legislative proposals on some politically divisive priorities that might have gotten pushed aside during the focus on re-election.

Still, the outcome of the election is probably not as critical as you might think. Here’s why:

A second Obama administration wouldn’t get significant legislation passed. Until recently, it appeared all but certain that the Republicans would take the Senate, but they are an absolute lock to keep control of the House of Representatives. So if President Obama is reelected, he will be no better off relative to Congress than he is now and could be slightly worse off – due to the Senate’s confirmation power – if Republicans manage to wrest control of the Senate from the Democrats. 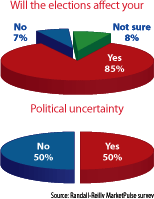 To purchase the July MarketPulse report, go to www.rrmarketpulse.com.

Implementation of far-reaching anti-business regulations under a second Obama administration would be unlikely. Many major regulations would require congressional authorization, which Obama wouldn’t get. The president still has considerable regulatory and enforcement power independent of Congress, of course, but don’t overestimate this power. Executive branch action is still subject to judicial review, and a lame-duck administration can’t ignore the political impact of its actions on its party’s standard-bearer in the next election. The kind of radical change many fear from regulation over the next four years simply isn’t easy to do.

Even if the Republicans take the White House and Senate, don’t expect much legislative change. At this stage, the Republicans still have a strong chance to win control of the Senate, but they have virtually no shot at a filibuster-proof 60-seat majority. Without 60 votes in the Senate, the Republicans couldn’t enact much that is controversial. They could use a procedure called budget reconciliation, which isn’t subject to filibuster, but this option would be available only on matters directly related to federal spending. Of course, there’s always the 2014 mid-term election, but traditionally the party holding the White House loses ground.

Rolling back current regulations isn’t simple. Given congressional gridlock, regulatory change is the most fertile area for a pro-business agenda, but a new president can’t just terminate regulations he doesn’t like. Except for rules issued right at the end of the previous administration, changing an existing regulation requires the same process as imposing one, and that means notice and comment, cost/benefit analyses and the inevitable lawsuits when certain parties don’t like the outcome.

Nobody argues that the election doesn’t matter. It just doesn’t matter nearly as much as the business fundamentals that aren’t dictated by politicians and bureaucrats in Washington, D.C.