Cargo securement soon will be part of the Vehicle Maintenance BASIC. Be ready.

A freshly-minted driver who recently had graduated from a CDL school came by to chat with his instructors and let them know how things were going. He’d just gotten hired by a big fleet, and the instructor asked him how he liked his job so far. “I love it,” the driver replied. “I only work about 15 minutes a day, tying down my load. The rest of the time, I just drive.” 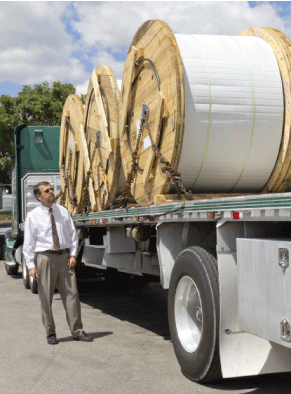 The driver’s attitude was instructive. Cargo securement demands repetitive attention to detail, patience and consistency – traits that are rare among all humans, but for truck drivers, extremely critical to safety. Properly securing a load always has been vital for a successful fleet operation – and in today’s Compliance Safety Accountability environment, even more so.

Dan Doran, president of Cincinnati-based Ace Doran Hauling and Rigging, says that while his fleet hasn’t seen an increase in inspections or violations since CSA was implemented, his shop and drivers did prepare beforehand to limit their exposure.

“We educated our contractors as to the importance of inspecting their tools when it comes to chains and straps and blocking components,” Doran says. “It used to be that if it was a strong chain with hooks on both ends, it was good enough to go. Now straps are being looked at as the inspector goes by them on the road or as they go through a scale to see if they can find a reason to pull them over and go over the truck more closely.”

Good load securement is critical, and not only because law enforcement is keeping a closer watch. Customers entrust a fleet to transport its products safely and have them arrive in good condition. Add potential litigation resulting from property damage or injury into the mix, and the stakes are raised even higher. And since proper load securement takes time, it also affects a fleet’s bottom line – even before the load is under way.

“Tarping a secured load can take up to two hours for a driver and sometimes more, depending upon the weather,” says Roland Lockard, operations manager with UltraTarp. Often, drivers don’t get paid additional money for tarping secured loads for shippers and receivers, Lockard says.

Under CSA, violations for improperly secured cargo negatively impact both a fleet and a driver. If a citation is issued, it now is entered into the fleet’s Cargo-Related BASIC (Behavior Analysis and Safety Improvement Category). Admittedly, there are several violations for which a driver is not responsible – including aspects of the law that assigns responsibility to either the shipper or the fleet – but if the ticketing officer determines that the infraction is one the driver could have rectified, a separate violation will be entered into that driver’s personal database.

“Load securement is more important than ever because everyone – fleets and drivers – is focused on their CSA scores.”

It appears that dynamic only will intensify going forward, as the Federal Motor Carrier Safety Administration soon will finalize additional changes to the Cargo-Related BASIC.

If a flatbed fleet has a new unfamiliar load, Maverick recommends obtaining pictures of it – or sending someone to the customer’s location to inspect the load and figure out how to transport it safely.

Following a four-month preview of proposed changes to CSA, FMCSA announced the Cargo-Related BASIC is being changed to the Hazardous Materials (HM) Compliance BASIC to better identify more carriers with HM safety and compliance problems. FMCSA also is strengthening the Vehicle Maintenance BASIC by including cargo/load securement violations from today’s Cargo-Related BASIC.

“Some of the weighting and the placement criteria, as well as the Hazmat BASIC, will change,” says Dean Newell, vice president of safety for Little Rock, Ark.-based Maverick Transportation.

As law enforcement attention on cargo securement increases, all fleets are reviewing their securement procedures. As a carrier with a large flatbed operation, Maverick finds itself under a more intense spotlight than fleets hauling box trailers.

“We’re definitely seeing more flatbed inspections as CSA kicks in,” Newell says. “I’m not saying that’s a bad thing – it’s to be expected.” That’s why Maverick monitors its drivers and how their CSA scores are faring within its fleet. “Both (fleet and driver) scores are important,” he says.

Maverick’s basic orientation lasts five days, and if the driver is working in the company’s flatbed division, load securement consists of another week of hands-on exercises at maverick’s training facility – and if they’re hauling glass, another week on top of that.

Under CSA, cargo securement includes a wide array of inspection points and potential violations. Beyond simple unsecured loads, failing to flag a load properly or marking hazardous materials improperly can result in a violation. Similarly, a driver transporting hazardous materials can expect to be ticketed for failing to have proper emergency information on hand when it is requested.

Flatbed operations bear the brunt of cargo-related CSA concerns simply because of the visibility of their loads and securement devices, but reefer and van operations don’t have it any easier. CSA also specifies that cargo inside a van trailer must be secured against movement in all four directions.

As with a flatbed operation, if the driver fails to secure the load with straps or load bars across the back of a load that does not reach the back doors, he will end up with a ticket.

“Drivers bear the brunt unless it is a sealed load and the driver is doing a drop and hook,” says Bob Dissinger, director of U.S. sales for Kinedyne.

If the trailer is loaded but not sealed, the driver should open the trailer doors and check to see the load is secured properly, Dissinger says. On flatbeds, he should check all cargo securement devices to ensure the proper amount and tightening, he says.

Keeping up to date

Continuing education is the most important factor in fending off CSA hits. “You really need to monitor and keep up to date on cargo securement rules and regulations,” Dissenger says. These laws change regularly at federal, state and local levels. 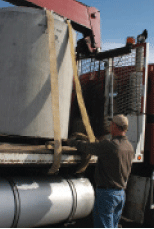 Dissenger says fleets also must conduct regular safety training for drivers and anyone else loading and securing a trailer. “At Kinedyne, we tell our customers to be aware that not all safety-related securement products are the same,” he says. A lower price tag often translates into lower product quality, consistency and life expectancy, he says.

Newell directs Maverick’s cargo securement training programs and describes them as extensive and intensive, relying heavily on a systematic approach to education and procedures. Basic orientation last five days, and if the driver will be working in Maverick’s flatbed division, load securement consists of another week on hands-on exercises at the company’s training facility – and if they’re hauling glass, another week on top of that.

Maverick’s training also is ongoing. The fleet films its own in-house safety videos – some as short as 15-second reminders of proper safety procedures – that are beamed out to trucks on the road for drivers to watch at their convenience.

“I think our drivers like the fact that they have that information handy if they need it,” Newell says.

Maverick’s commitment to load securement goes even deeper. “Everything that we haul is closely examined before it ever gets loaded onto a trailer,” Newell says. This starts early in the sales process: When a Maverick salesman closes a deal, one of the check-off boxes on his list is to contact the company’s safety department and initiate a process for assessing proper load securement.

“We look at the securement of the load and make sure we can handle it with our existing equipment and systems,” Newell says. “If not, we come up with alternatives to make it safe.”

Maverick’s sales team works closely with the safety department on the driver training aspect. If the customer has a new unfamiliar load, Newell’s team will obtain pictures of it – or even send someone to the customer’s location to inspect the load firsthand and figure out how to transport it safely.

“Load securement is more important than ever because everyone – fleets and drivers – is focused on their CSA scores,” Newell says. “You have to control it.”