Liter Fever: The battle between 13-liter and 15-liter engines 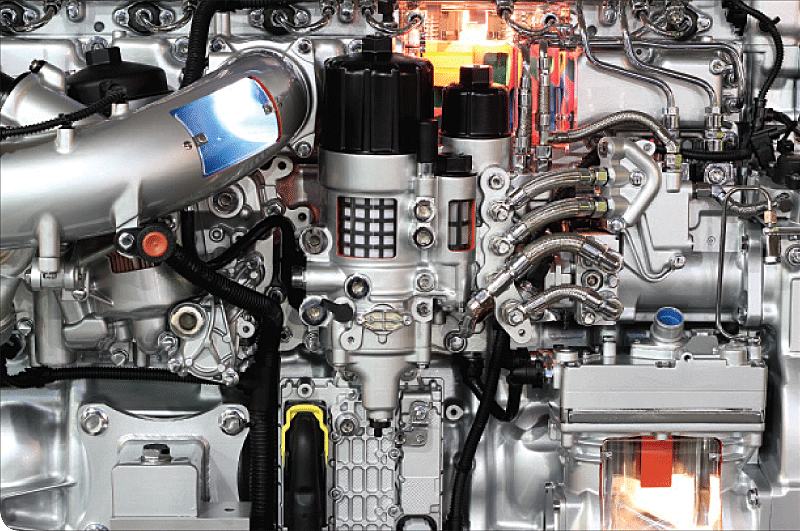 The dust has settled, and two engines dominate today’s North American heavy-duty truck market. Which one is right for you?

For all the styling cues and creature comforts manufacturers design into today’s trucks, nothing defines the vehicle’s pure essence and purpose more than the engine resting under the hood.

Get any group of fleet managers together for any length of time, and the conversation inevitably will turn to engines. Size, displacement, power and application: Regardless of which engines a fleet hates or swears by, those are the factors that matter most when it comes to making a truck work effectively for a business. Today’s heavy-duty engine market is undergoing fundamental changes that will affect how a fleet specs future truck purchases – assuming it hasn’t already.

In yesteryear’s world of cheap fuel, horsepower was king, so for many years it only was natural that the race to the top in the diesel engine world was defined by steadily larger and more powerful engines. At the height of the “Power Wars,” it wasn’t unusual to see a long-nosed 600-horsepower tractor blasting down the highway turning 1,900 rpm on the tach and maintaining a consistent 75 mph without so much as breaking a sweat.

But those were the good old days. In today’s world of $4-a-gallon diesel fuel, a 600-horsepower engine is no longer a vanity purchase: Spec’ing one demands an unassailable business case in which the requirement for a lot of power and torque is an absolute necessity – usually heavy-haul or vocational applications.

Today’s heavy-duty diesel engine evolution has settled on two basic displacement configurations: 13-liter and 15-liter, the larger of which led North American sales for many years. Lately, however, 13-liter engines have emerged as the overall market leader. “We’ve been doing a lot of research on these engines lately, and we are seeing a shift away from 15-liter engines to 13 liters,” says Kevin Baney, chief engineer for Kenworth Trucks.

“Correct engine sizing is the base from which to optimize performance.”

More line-haul customers are switching because of weight reduction and fuel economy benefits, Baney says. “With our Paccar MX-13 engine today, we can offer them 385 horsepower all the way up to our 500-horsepower option, which will debut in January,” he says. “Our broad horsepower range works for most customers.”

Navistar saw the trend toward 13-liter power coming some years ago as customers became more focused on weight, payload and fuel efficiency, said Steve Gilligan, vice president of vocational and product marketing. “That’s what drove us in our development of our MaxxForce 13,” Gilligan said. “The added weight of emissions-related equipment and fluid is offset by the 13-liter engine.”

Daimler’s Freightliner and Western Star brands supply 13-, 15- and 16-liter diesel engines, including the DD13, from its in-house Detroit lineup.

Jennifer Rumsey, executive director of heavy-duty engineering for Cummins, notes that most of today’s 13-liter engines actually are 12- to 13-liter engines. While engines in this class have displacements ranging from 11.9 to 13 liters, 13-liter and 15-liter displacements fill different needs within the Class 8 truck market, she says.

The Cummins ISX12 – which shares common components with the ISX15 – has been optimized for regional hauling and less-than-truckload operations, as well as vocational applications such as dumps and mixer trucks and fire and emergency vehicles.

“The older thinking was to buy a larger engine and run it easy – it’ll get good fuel efficiency and last forever,” says David McKenna, powertrain sales and marketing manager for Mack Trucks. “There is a perception that bigger is better for a long-life engine – I strongly disagree. Our 13-liter Mack MP8 engines have accumulated a phenomenal amount of miles. During disassembly and inspection, we were more than pleased with our design criteria being met easily based upon million-mile wear observations.”

Going even smaller, Mack now has customers using its 11-liter MP7 who are seeing a documented 2 percent fuel efficiency improvement compared with a 13-liter and 3 percent compared with a 15-liter, McKenna says. “Correct engine sizing is the base from which to optimize performance,” he says. “If you start from the wrong base, nothing else you do will be correct, and maximum optimization will never be achieved.”

Ed Saxman, drivetrain product manager for Volvo Trucks, says Volvo had a 12-liter engine that it increased to 13 liters due to power density so that the top rating could be increased to a full 500 horsepower with 1750 lb.-ft. of torque. “We also introduced our 11- and 16-liter engines to be able to offer additional lighter-weight and higher power options,” he says.

Gilligan contends that the market shift isn’t defined wholly by displacement for displacement’s sake. “What you’re seeing more in more, in terms of engine technology, is a smaller-displacement, lighter-weight and more efficient engine delivering the same level of horsepower that was only achieved in the past with a 15-liter engine,” he says. “Average horsepower has shifted only slightly over the past 10 years. The same fleets that were running 430-horsepower engines a few years ago may have shifted peak horsepower upward, but torque is relatively unchanged and is well within the efficient operating range of 13-liter engines.”

Larger-displacement engines can offer higher torque without adversely increasing peak cylinder pressure, Saxman says. “Horsepower and displacement are less connected than many think,” he says. In Volvo’s case, the average delivered horsepower of the 13-liter engine in its tractors has been slightly higher than the average horsepower of the 15-liter supplier engine that it delivers. ‘The same was true for our 12-liter, which preceded the 13-liter.” 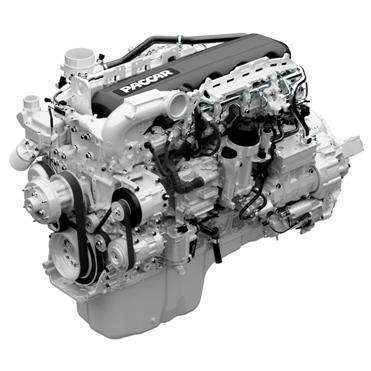 The 12.9-liter Paccar MX-13 Engine is standard in Kenworth and Peterbilt on-highway and vocational trucks.

Volvo uses similar designs for both displacements, and the design concept can be used across three displacements, but some part sizes may vary out of necessity. “While one might surmise that a larger displacement means more robust part design, that is not necessarily true,” Saxman says. “The Volvo D13 connecting rod is more robust than those of other larger-displacement engines.”

McKenna believes Mack’s MP7 at the 32-horsepower-per-liter power density has proven to be the right balance for engine fuel economy and performance versus power output. “Potentially, the larger-displacement engines should see the power density number increase, as the larger mass platform can offer greater strength in the block and crank areas,” he says.

If an acceptable power density from each engine is maintained, the smaller-displacement engine should get better fuel economy since it has lower internal friction, less reciprocating mass and a lower weight. “Reducing tare weight alone contributes to better fuel efficiency,” McKenna says. “Right-sizing the engine is extremely important. Bigger is not always better.”

In addition to weight savings, another 13-liter advantage is packaging. “We can put 13-liter engines into a shorter BBC tractor with a shorter hood,” Baney says. “That gives drivers both improved maneuverability and visibility.”

Some fleets still prefer large-displacement engines for a variety of reasons, and there still are a large number of applications that depend on them to get their work done.

Larger-displacement engines remain popular for a variety of reasons, Baney says. “For a long time, the residual value on the back end of a 15-liter engine remained very strong,” he says. “You simply could get more money for them on the used truck market, but we’re starting to see that change as well because 13-liter engines have carved out a niche for themselves in the horsepower ‘sweet spot’ that fleets desire.”

However, 15-liter engines can push up into the mid-500 horsepower range. “That’s an attractive proposition for fleets in vocational applications,” Baney says. “Each displacement is in a ‘sweet spot’ of its own.”

While 12- to 13-liter engines are stretched to their mechanical and thermal limits, larger-displacement 15-liter engines have increased capacity and margin relative to cylinder pressure capability and mechanical and thermal limits, Rumsey says. “Additionally, lower power density may enable a simpler engine platform or may provide the flexibility to optimize the engine and engine subsystems to achieve the best blend of desired performance, fuel economy and emissions characteristics.”

“Remember that the driver alone can have a 30 percent impact on fuel economy,” says Rumsey. “It’s easy to see how important better drivability and better performance are with larger-displacement engines – especially in the hands of an expert driver who can make the engines deliver exceptional fuel economy.”

Each engine also should be optimized for the specific intended duty cycle. While larger-displacement engines can allow for greater gross power output, they cost more because of their added mass.

“While we’ve made some strong inroads with customers and convinced them that their needs can be met by a 13-liter engine, there’s still a legitimate need and demand for 15-liter power – especially with higher-horsepower users,” says Gilligan, explaining Navistar’s reason for relaunching the Cummins ISX15 in its ProStar+, with plans to offer the engine soon in both its 9900 and PayStar tractors.

Fleets considering moving either up or down in terms of engine displacement need to review their operational history before making a decision.

Looking at the engine’s Logged Vehicle Data can tell a lot about how it is performing relative to the work required and if there’s too much or not enough power on hand. “It can tell you if there’s extremely high demand for power at very low vehicle speeds,” McKenna says. “Likewise, you can learn if there’s lower power demand at higher vehicle speeds.”

Bore and stroke optimization, valve size and turbo efficiency are all components of optimizing fuel economy. “At the same time, horsepower and torque offerings typically increase with engine displacement because the mechanical limits of an engine are reached as power density increases,” says Rumsey. “A higher-displacement engine provides the flexibility for optimal gearing, allowing the engine to operate at lower engine speeds at cruise – which also translates into good fuel economy.”