The launch of this year’s Real Life Trucking Hero contest comes as my brothers and I plan a family reunion around my father’s 75th birthday.

So this post is about heroes, or about who’s a real hero in my father’s book — and about the many truckers who should be gratified to learn they qualify.

While the contest aims to recognize Heroes with a capital ‘H’, the notion my dad tried to pass along was that a hero was any man (or woman, as I’ve come to appreciate) who goes to work everyday, takes pride in his job and takes care of his family.

I remember my teen-age scoffing at his unimaginative view. A hero, after all, was the guy who hit a walk-off homer run in Game 7 of the World Series, or who walked on the moon.

And my father, himself still a young man in his mid-30s and working in middle management, just smiled.

“There aren’t many of those guys,” he said. “A lot of men go to work every day. But it’s not easy, especially when you realize you’re never going to get that chance in the major leagues. It’s hard, actually.”

Of course, I’ve since found the hard part out for myself.

1. You must love your work, not simply like it or tolerate it until you can find something else to do. You might be able to manage the rest of this list — and that makes you very, very good at the job — but if your heart’s not in it, sooner or later trucking will demand more of your body and spirit than you’re willing to give. That’s when you start the slide. Don’t become one of “those guys” around the truck stop or the terminal.

2. You must be safe, for your own sake and for the sakes of those fathers and mothers hauling loads, as well as all those parents and children you share the highways with. The default move is: let the other guy go first.

3. You must be professional. You take care of yourself, your customers, your co-workers and your equipment. You make the effort to get better at your job every day.

4. You must teach, with patience. Take the time to make sure new drivers respect the job. Is there any other career with such a wide difference between those who do it well and those who are a physical threat to everyone in their path? (Not a unique insight, but one worthy of further discussion.)

­5. You must be your own man/woman. If you’re doing all these other things right, there’s no reason to let yourself get dragged into the muck with the bottom-feeders that are all too common in this business. You’ve got nothing left to prove to anybody — and that’s a uniquely heroic place to be.

It’s not everyday that someone is challenged to risk life and limb for a stranger — with any luck, that’s never. But a truck driver with 100,000 miles or more on the road each year is certainly much more likely than most folks to come across a burning car or an RV sideways in a rain-filled ditch. And it’s important to recognize those truckers who go above-and-beyond.

But, hey, just doing an important job well, every day, that’s something to brag about. Even if your ungrateful teenagers don’t think you’re cool.

Trucker-heroes who overcome other challenges are worthy of recognition, as Overdrive’s Todd Dills wrote about for last year’s contest.

Not to toot Randall-Reilly’s own horn, but encouraging new truck drivers is great, too.

And improving the image of trucking is critical, of course, and the Truckload Carriers Association promotes multiple initiatives.

(For the record, I called around about this ABC News faux-reality bit regarding a make-believe predatory trucker, but I didn’t write about it because, apparently, no one saw it. That’s good.) 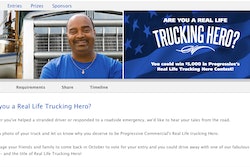 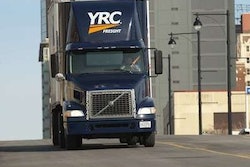 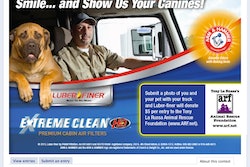 FRAM donating money to animal rescue for pictures of pets