Beyond employee education, preventive spec’ing of both power units and trailers is critical. “There are a lot of things you can do to make it tougher on the criminals,” such as modifying trailers in a variety of ways to make them tougher nuts to crack, says Carl Tapp, a retired maintenance director for P.A.M. Transportation, who now runs Solutions Advocates. “A lot of it depends on your budget,” he says.

Many measures can be carried out in a fleet’s shop by its own technicians, who can install a wide array of security measures such as satellite-controlled stainless-steel locking pins on the inside trailer doors, huck-bolted door hardware and frames, horizontal pins in the rear trailer bolster to reinforce the doors, aluminum roofs instead of translucent plexiglass, and brightly painted undercoating to help inspectors spot breaches in the trailer floor.

Communication is vital to combating theft, and today’s technology makes tracking shipments and reacting to issues easier and timelier. Tapp urges fleets to look into both passive and active communications systems between the truck and the home office – technologies that Prime also values.

“You have more virtual eyes and ears out there on the road than ever before,” says Nick Erdmann, business development manager for Transport Security Inc. “When you look at all the systems available to fleets today – things like real-time communication, telematics and geofencing and monitoring systems for both trucks and trailers – they have more tools to help them fight theft than ever before.”

But one of the most effective anti-theft tools Boehning has seen is a much more obvious low-tech method: a professional-grade padlock on the trailer doors. “I’m constantly amazed at how many unlocked trailers I see running down the roads today,” he says. “Our number-one thing is our trailers are always locked, even if they’re hauling air.”

Tapp agrees that seal integrity is vital. If a seal has to be broken for repairs or a police check, establish procedures so that everybody knows about it. Record the numbers of both the seal that came off and its replacement, Tapp says.

Fleets also should consider reaching out to and nurturing partnerships with law enforcement agencies across the country. Walt Fountain, director of safety and enterprise security for Green Bay, Wis.-based Schneider National, advises fleets to attend one of several regional cargo theft prevention conferences where they can learn ways to improve their anti-theft measures and training and build a nationwide network for law enforcement assistance.

Above all, Tapp urges fleets not to be complacent about combating theft. “Crooks are smart,” he says. “No matter what you do, they’re going to figure out a way to defeat it. It’s a constant process, and you can never let up.”

Tapp also reminds fleets of an entirely different reason why drivers are a key element to consider when fighting cargo theft. “I hate to say this, but I think a lot of cargo theft cases are inside jobs,” he says. “Treat your drivers right. They do a tough job day in and day out. If you acknowledge that and pay them a fair wage, they’re going to be less likely to steal from you.” 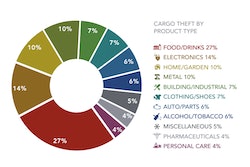