“UDOT’s Motor Carriers Division joins other agencies in recognizing how Commercial Mobile Radio Service (CMRS) transponder technology can benefit the trucking industry as well as public safety,” said Brian Heath, president of Drivewyze. “The addition of Utah, so soon after we added Colorado, continues our expansion of service westward across the United States. Truckers driving east and westbound on I-80 and north and southbound on I-15 with Drivewyze PreClear will find more inspection site bypass opportunities along their routes.”

“Mobile-based inspection site bypass service offers our commercial vehicle inspection officers a great tool to more efficiently screen vehicles and allow safety-conscious fleets and owner-operators with their own DOT numbers to bypass,” said Chad Sheppick, director of UDOT’s Motor Carriers Division. “We can do this without slowing the flow of freight traffic on our highways. With two major trucking routes passing through and intersecting in our state’s most populous city, we appreciate having a tool that can help us in our mission to keep Utah’s highways safer for the motoring public.”

“Because traffic can be heavily congested at time with commuters, Drivewyze offers our inspection officers options that won’t contribute to further traffic congestion in and around weigh stations,” Sheppick said. “Drivewyze provides us this valuable service at no cost to our agency. With public resources being tight, that’s also an important consideration.”

Drivewyze leverages cellular networks and the internet to add transponder-like functionality to tablets, smartphones and select electronic on-board recorders. Unlike traditional methods that use dedicated short-range communication transponders in every truck, Drivewyze doesn’t require the installation of additional equipment.

The Drivewyze PreClear weigh station bypass application is available for Android and iOS-based tablets or smartphones, and is now also integrated into PeopleNet Blu.2 and Tablet devices. 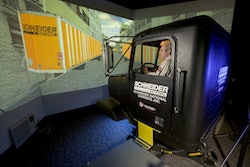