The Teamsters Union has voiced its opposition to recent Congressional action to roll back the 2013 changes to federal hours-of-service restart provisions, but American Trucking Associations head Bill Graves is holding strong on the group’s support for suspending the changes.

Teamsters President James P. Hoffa penned a letter June 9 to the House asking it to not add any amendments to its DOT funding bill that would “delay, revise or replace” the 34-hour restart rules, according to Hoffa’s letter.

The Senate version of the bill came out of the chamber’s Appropriations Committee last week with an amendment to suspend some of the 34-hour restart provisions until more study could be done to back up the rule.

The House passed its Transportation, Housing and Urban Development appropriations bill June 9 without the amendment.

Hoffa pointed to the recent high-profile truck crash involving actor Tracy Morgan as evidence to keep the current rules, saying the crash “could have been prevented had Walmart’s driver been properly rested.”

Hoffa also says the 2013 rules protect drivers from carriers who want to “push their drivers to squeeze every possible hour out of them that they can.”

ATA’s Graves, however, addressed the Morgan crash with a statement saying the 2013 restart rules actually decrease safety, as they “[alter] driver sleep patterns and [put] more trucks on the road during more risky daylight hours.”

He also addressed public reports that the driver hadn’t slept in more than 24 hours — but had taken the proper amount of time off duty — by saying there’s no way the industry nor government action can “dictate what drivers do during that off-duty period.”

ATA and its members “strongly believes that drivers must take advantage of their off-duty periods for rest and that drivers should not drive if they are fatigued.”

Notably, several senators who voted in favor of the restart suspension objected to the rule because of its regulatory overreach. Sen. Mary Landrieu said she is ‘viscerally opposed’ to the federal government’s deciding when people should sleep. 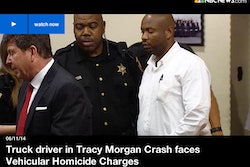