With the Highway Trust Fund expected to run short as soon as next month, an Oregon congressman wants to revamp the way Americans pay for transportation projects. But other indications from Capitol Hill suggest time is also running out on the chances for a substantial transportation reauthorization bill ahead of the November elections.

As for saving the Highway Trust Fund from insolvency, Rep. Peter DeFazio, a Democrat and senior member of the House Transportation and Infrastructure Committee, has introduced HR 4848, “The Repeal and Rebuild Act.”

The bill is designed to be a long-term solution that would create American jobs, fix the nation’s crumbling infrastructure and “break the transportation funding impasse that has plagued Congress for years.”

“America’s economic competitiveness is at stake. While Congress hems and haws over how to deal with the dwindling Highway Trust Fund, the rest of the world is moving full-speed ahead,” DeFazio says. “I introduced a real proposal because I’m tired of Congress being all talk and no action. Let’s get this done.”

In the first year the barrel tax would raise less than the 18.4 cent gas tax, providing potential short-term relief to consumers, according to DeFazio. The barrel tax would be indexed to DOT’s National Highway Construction Cost Index and to CAFE standards to account for less fuel consumption attributed to those standards. The tax would not be applied to aviation, rail, or home heating fuel.

DeFazio announced the bill at the Rally for Roads event in front of the U.S. Capitol last week.

The rally, organized by members of the transportation construction industry, was the third one-day gathering this year designed to promote the importance of a fully funded, multi-year transportation bill.

But even as some legislators used the event to challenge their peers in the House and Senate, others in key leadership positions have suggested that there’s neither enough time nor the will to tackle a major bill ahead of the Sept. 30 expiration of MAP-21, the current funding plan.

“In a three-week period, to responsibly walk through all the different approaches, I just think senators are saying that’s a bit much,” Senate Finance Chair Ron Wyden told Politico last week. “It’s hard to make the case that you can put all that together in three weeks.”

House leadership, meanwhile, has floated a plan to trim the services offered by the U.S. Postal Service and use the expected cost savings over 10 years to make up for the fuel tax shortfall. But Senate leaders  and the Obama administration have both dismissed the proposal.

“We’ve got to get past the gimmicks in transportation and really get serious about trying to get a long-term strategy done,” Transportation Secretary Anthony Foxx said. 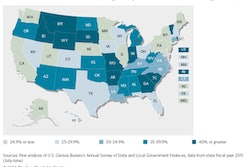