Zonar announced the addition of Vikas Jain to the company in the position of Chief Operating Officer.

Vikas joins Zonar’s executive team at a time of unprecedented business growth and will play an integral role in continuing to drive the overall business strategy for continued growth including mergers and acquisitions, the company says.

Prior to joining Zonar, Vikas held several leadership positions spanning sales, engineering, operations and corporate development in commercial transportation, automotive and M2M industries. Most recently while serving as the vice president and general manager at Omnitracs he launched a new generation of cloud based services through the acquisition and subsequent management of FleetRisk Advisors and Sylectus. He also played an active role in the divesture of Omnitracs from Qualcomm for $800 million in November 2013.

Prior to Qualcomm, Vikas was the director of sales at Sierra Wireless where he was responsible for leading the automotive business in North America. Vikas has also served as executive vice president and chief technology officer at PeopleNet.

“We are excited to welcome Vikas to the Zonar team,” said Brett Brinton, Zonar’s CEO. “Vikas brings a wealth of knowledge, experience and success within the transportation telematics industry. We look forward to his vision and insight as we continue to grow and innovate to serve the needs of commercial and public fleets.”

Vikas has won numerous industry awards, most recently, under his leadership FleetRisk Advisors won the IBM Business Analytics Excellence Award for ROI Achievement in 2013. Vikas holds a Master of Science in Electrical Engineering from Clemson University and a Bachelor of Engineering from Delhi University. 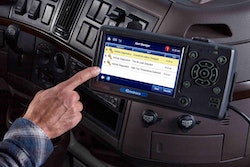 Omnitracs seeks to build on Qualcomm legacy while parting ways