A year-long study of trucking industry trends in social media was recently completed by TrueVoice on behalf of GE Capital, Transportation Finance. The study involved a search of 250 million online outlets and revealed the most common areas of conversation. 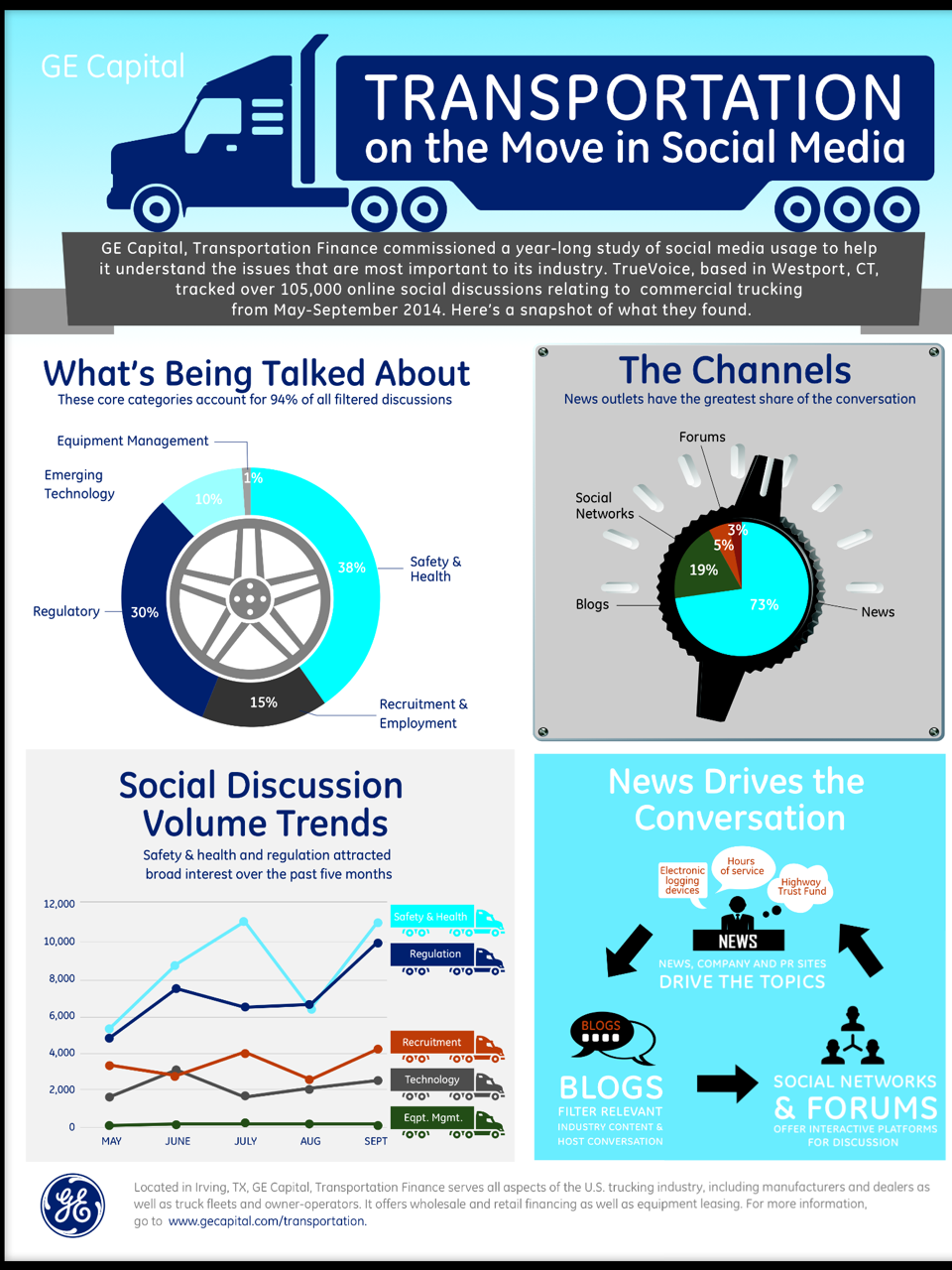 Online conversations start with news and spike when government agencies and industry associations make announcements. The news is passed along through blogs and becomes personal in Facebook and in forums.

The volume of industry-specific conversations happening in social media was surprising, he said. “But on the other hand, we know that drivers want to keep in touch with their families when they’re on the road and social media is a convenient way to do that.”

More than 80 percent of online activity was dominated by three topics: safety and health; recruitment and employment; and regulatory issues. The discussions tend to be interrelated, touching on several of the issues simultaneously. Online conversations involving technology and equipment management made up about 11 percent.

Technology-related discussions focus on new products that are being developed in response to regulatory demands, especially those relating to emissions and safety. In general, online conversations about technology were jump-started by company-issued product announcements.

A lot of the activity in the equipment category was related to fleet ownership. Most of the online activity took place in forums, indicating that fleet company leaders were looking to interact with their peers.

Online activity in the trucking industry peaked in the summer months of 2014. Fall is usually the height of activity, but this year more than 105,000 discussions on the above topics happened between May and September 2014. The study revealed higher-than-normal level of news activity from the high-profile accident on June 7 involving celebrity Tracy Morgan.

This is the second-consecutive year that GE Capital, Transportation Finance has conduct a study of social media usage in the trucking industry.

Transportation Finance offers wholesale and retail financing in addition to equipment leasing to manufacturers, dealers as well as truck fleets and owner-operators.

“We launched this project in 2013 for two reasons,” Clark said. “We wanted to understand the challenges and issues that are most important to the industry and to do it in an objective way. And we wanted to see where our customers and prospects were spending time and having conversations online.”

The study shows a trucking audience that is receptive to valuable information, which he noted is why GE Capital, Transportation Finance, has invested in a trucking-focused web site and Twitter handles: @GETruckFinance to tweet about important industry issues and @GELendLease to tweet about issues important to mid-market companies overall, including those in trucking.