Starting this year, Pride Transport joined a small but growing number of fleets that are providing drivers with premium satellite TV service.

The Salt Lake City-based company signed a three-year subscription with EpicVue. For a flat monthly fee, per truck, Pride Transport got all of the equipment — mobile antennas, 24-inch televisions, DVR receivers — and more than 100 channels that include premium options of HBO, Showtime and NFL Sunday Ticket.

“We feel like driver retention is more than just compensation. It is also about improving quality of life for drivers,” said Jay England, chief executive of Pride Transport, which has 400 trucks to power its refrigerated and flatbed operations. “We want them to feel as close to normal as possible by having the conveniences of living at home.”

England says he needs a few more months to determine what impact EpicVue is making to the fleet’s retention and recruiting numbers. Currently Pride Transport has 120 units activated and installed. The rollout has gone quickly, England says, and results look promising so far.

“There has been a lot of excitement, interest, and questions regarding the technology,” he says.

EpicVue opened for business in May, 2014 when Ian Williams and Russ Raddon started a new business venture with Lance Platt, who founded Groove Entertainment Technologies.

Groove Entertainment Technologies, located in Salt Lake City, has focused on delivering television service to the hospitality industry and big commercial properties for the past eight years. EpicVue became a stand-alone business and sold its first fleet subscription in June, 2014, to Boyd Bros., one of the nation’s largest flatbed carriers, headquartered in Clayton, Ala.

The EpicVue subscription includes the antenna, 24” television, DVR receiver and cabling. If purchased separately, the equipment would cost between $1,200 and $1,500 and the premium DIRECTV programming would be $100 a month, Platt says.

EpicVue offers all of the equipment and DIRECTV programming for as low as $50 per truck, per month. The subscription includes full warranty and technical support. The company’s target market is fleets with 20 or more trucks.

On Dec. 3, EpicVue hosted a team of executives from DIRECTV to review its progress in the fleet marketplace. During the meeting, Platt said one of the company’s first customers has been using the service in 300 trucks over a four month period. The fleet compared the turnover rate from this segment of its fleet to the remainder of its fleet that does not have the service activated yet.

During this four-month period, the carrier lost 4 drivers from its 300-truck fleet and 37 drivers from the remaining 650-truck fleet. This equals a difference in driver turnover of approximately 77 percent.

Currently, EpicVue has its service installed in more than 1,200 trucks at 21 fleets. It has commitments from fleets to install more than 3,300 trucks within the next 12-18 months, he said. As EpicVue enters its second year in the transportation industry, its growth is accelerating.

“We aren’t selling television services. We are selling quality of life,” Platt said.

During the meeting, Platt also discussed some recent strategies to shorten its sales cycle. It is working with a specialized lender to create a same-day credit approval process and has created ways to accelerate the installation process for fleets.

Jay England says EpicVue worked with Pride Transport to implement the equipment and service quickly. “We have a lot of trucks and understand what is involved. This is not easy,” he said. “EpicVue helped to take down those challenges.”

To find out more about the latest technologies and services that make satellite TV a viable option for fleets, click on one of the following companies:

To see a photo gallery of satellite TV options for fleets, CLICK here. 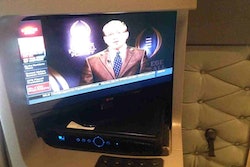 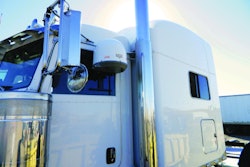 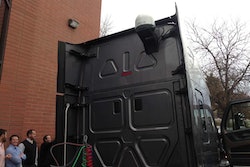