The Teamsters announced last week that a group of 74 drivers and dockworkers at Con-way Freight’s Miami Lakes, Fla., facility voted to join the union, joining Con-way workers at terminals in Los Angeles, Calif., and Laredo, Texas.

The union also withdrew a vote in November at Con-way’s Irvine, Calif. location.

The Teamsters last week withdrew a vote at a FedEx facility in Pennsylvania, the fifth time its withdrawn a unionization vote at the company — a sign, says FedEx, that it knew it would not win the vote.

So far, workers at three FedEx facilities have voted to join the union, while three others have voted against it. 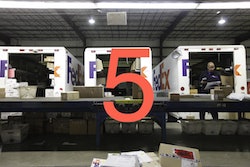 ICYMI Index: 6 numbers to catch you up on this week’s trucking happenings