West Coast port employers have reopened operations after suspending work for the weekend and expect to resume negotiations with union dockworkers.

The Pacific Maritime Association returned to full operation at 8 a.m. Feb. 9 after halting loading and unloading of vessels at 5 p.m. Feb. 6. The association of port employers had proposed an “all-in” contract Feb. 4, after nine months of contract talks with the International Longshore and Warehouse Union.

The PMA has accused the ILWU of staging work slowdowns since October, while the union claims employers have allowed congestion to explode as a means of gaining leverage during negotiations.

It announced the work suspension after companies decided to quit providing “workers premium pay for diminished productivity.” The association allowed exceptions, such as for perishables and cruise ships, while terminal operators had discretion to continue yard, rail and gate work.

Yard operations – moving processed containers for truck and rail delivery to customers –have been limited by the union withholding crane operators and working slowly, the association said.

“The union remains focused on reaching a settlement as quickly as possible with employers,” McEllwrath said. “Talks to resolve the few remaining issues between the Longshore Union and Pacific Maritime Association are ongoing.”

The ILWU also posted Feb. 6 photos of Los Angeles and Long Beach docks to dispute the PMA’s assertion of jammed ports. Factors outside the union’s control, such as a chassis shortage and the association’s elimination of nightshifts at many ports last month, escalated port congestion, it said.

“The PMA has told the media that the ports are too full to receive cargo, but the photos tell another story,” the ILWU stated.

A federal mediator joined talks Jan. 5 after both sides requested help negotiating the contract affecting 20,000 workers. The union temporarily extended their contract when it expired in July, but refused another extension in late fall.

A recent stumbling block in negotiations is the PMA’s refusal to allow the ILWU power to fire arbitrators who rule against the union, such as during work slowdowns. Arbitrators found the ILWU at fault for 200 of the 250 slowdowns or work-stoppages that occurred between 2008-2014. 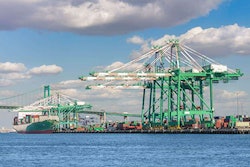