The Federal Motor Carrier Safety Administration finished its work late last month on a 2012-mandated rulemaking that makes it illegal for shippers, carriers and brokers to threaten drivers with “economic harm” (loss of business or pay, basically) and puts in place fines of up to $16,000 for those that get caught doing so. The rule goes into effect Jan. 29.

Following publication of the rule’s proposed version last May, comments from trucking groups like the Owner-Operator Independent Drivers Association and the American Trucking Associations, along with comments from broker lobbying/advocacy groups and self-billed safety groups, drove changes to the rule’s final version, published Nov. 30 in the Federal Register.

Two key changes FMCSA made to the rule’s ultimate draft: (1) Increasing the maximum fine to $16,000 from the proposed version’s $11,000 and (2) changing the definition of what constitutes coercion of truck drivers.

FMCSA said the new maximum fine of $16,000 stems from public commenters saying the $11,000 fine was too small and from a 1996 federal collections act that stipulated the amount, based on inflationary adjustments.

Some commenters, however, called for even more severe fines, such as suspending operating authority of violators.

FMCSA, in response, said it “will take aggressive action” against coercion rule offenders, which “may include initiation of a proceeding to revoke the operating authority” of carriers discovered to have coerced drivers, citing its 2013-instituted increase in authority to shut down carriers.

All fines collected in coercion enforcement instances will go to the country’s Highway Trust Fund, FMCSA says in its notice, rather than paid to drivers. The Department of Labor’s Occupational Safety and Health Administration would be responsible for pursuing driver collections in such cases, FMCSA says.

Following concerns of the “known or should have known” language in the rule’s proposed version — which essentially put the onus on shippers, brokers and carriers to know whether a driver would be violating federal safety rules by operating his/her vehicle — the agency struck that text in the Final Rule.

“The revised definition of coercion adopted in this final rule eliminates” that standard, FMCSA says, instead “emphasizing more strongly the driver’s duty to object as a predicate for any subsequent allegation of coercion.”

The agency also expanded the definition of coercion to include more than threats of lost miles, pay or loads, adding the more open-ended phrase “take or permit any adverse employment action.”

FMCSA also added a clause saying drivers must state “at least generally” which rules he or she would be violating by giving into a coercion attempt.

Broker groups like the Transportation Intermediaries Association, along with carrier lobbying group the American Trucking Associations, had asked FMCSA to require drivers to specifically identify the FMCSA regulation the driver would be violating. The groups also asked FMCSA to require drivers to document their objections in “a contemporaneous writing,” FMCSA says — another suggestion the DOT said went too far. The agency did say, however, “it would be in the driver’s best interests to document [coercion attempts] as soon as practicable.”

The final definition used in the rule is:

“A threat by a motor carrier, shipper, receiver, or transportation intermediary, or their respective agents, officers or representatives, to withhold business, employment or work opportunities from, or to take or permit any adverse employment action against, a driver in order to induce the driver to operate a commercial motor vehicle under conditions which the driver stated would require him or her to violate one or more of [federal safety] regulations…or the actual withholding of business, employment, or work opportunities or the actual taking or permitting of any adverse employment action to punish a driver for having refused to engage in such operation of a commercial motor vehicle.”

More on the rule will be published in the coming weeks, including how drivers file coercion complaints, what they need to prove it and the criteria FMCSA will use to decide which cases to pursue. 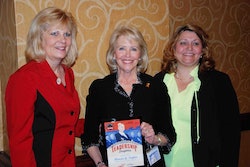