The first thing that caught my eye in the 120-page report was the decrease in large trucks involved in fatal crashes. Citing information from the National Highway Traffic Safety Administration’s Fatality Analysis Reporting System, FMCSA said 3,744 large trucks were involved in fatal crashes in 2014, a 5 percent drop from 2013. Even better, the fatality rate in truck-related crashes per 100 million vehicle miles traveled (VMT) by large trucks declined by 6 percent, from 0.143 to 0.134.

A look at the combination truck crash statistics – which provides a better representation of the Class 8 market – showed similar improvements. Combination trucks (defined as a truck tractor pulling any number of trailers and bobtails) involved in fatal crashes fell from 2,813 in 2013 to 2,717 in 2014. The rate fell from 1.67 to 1.60 on a 100 million VMT basis. There also was a slight decline in the overall fatality numbers, from 2,896 to 2,839.

The 2014 declines in fatality crashes follow a four-year period where such crashes steadily increased by 20 percent. Reversing that trend certainly is worth talking about.

“It is a tragedy whenever there is a fatality on our highways, but the trucking industry is pleased to see that it is a tragedy that fewer and fewer Americans are experiencing,” said Bill Graves, ATA president and CEO. “While the one-year decline being reported by the Federal Motor Carrier Safety Administration is positive, the long-term trend is of paramount importance, and that trend is impressive. The number of crashes involving large trucks has fallen 39 percent since 2004, and while there is much more to do, that is a figure our professional drivers, our safety directors, our technicians and our safety partners in federal and state law enforcement can be proud of.”

But before the industry celebrates too much, the report shows – and as Graves said in his statement – there is much more to do to improve safety. According to FMCSA’s report, large trucks involved in injury crashes rose sharply in 2014, from 73,000 to 88,000. Persons injured in large truck crashes per 100 million VMT rose from 34.6 to 39.8, the highest number since 2006.

It’s important to note that FMCSA’s report doesn’t measure crash accountability for any of the vehicle groups, and some industry estimates say as much as 80 percent of all truck-involved crashes are not the fault of the truck driver. But there’s no argument that the year-over-year truck-related injury crash statistics aren’t flattering.

However, if you take a step back and look at the data from a historical perspective, it shows a 33 percent decrease in combination trucks involved in injury crashes going back to 1994. The reduction in fatality crash data is even more impressive. Fatalities in combination truck crashes fell from a high of 5,148 in 1979 (before deregulation) to 2,839. And those numbers are something for which we all can be proud. 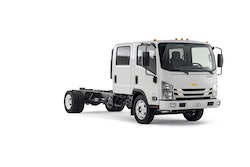