For the first time since Navistar President and Chief Executive Officer Troy Clarke launched his plan to return the embattled company to profitability more than 36 months months ago, Navistar International Corporation announced Monday a positive quarterly net income – the company’s first profitable quarter since the third quarter of 2012.

The $4 million the company reported Monday morning is up considerably from the $64 million net loss posted the same time last year.

“Our performance this quarter begins to demonstrate the earnings potential of this company,” says Clarke. “The fact that we earned a profit despite lower Class 8 truck volumes that impacted the entire industry underscores the tremendous progress we continue to make in managing our costs effectively and improving our operations.”

Revenues in the quarter slid to $2.2 billion, down 18 percent, compared to $2.7 billion in the second quarter last year on lower truck sales in the U.S. and Canadian markets, softer industry conditions and the discontinuation of the company’s Blue Diamond Truck (BDT) joint venture in mid-2015.

For the second half of 2016, Navistar lowered its sales forecast range by 20,000 units, blaming a weak market for Class 8 trucks. The company reduced its full-year revenue and adjusted EBITDA guidance.

“While we were net income positive in the second quarter, it will now be difficult for us to be profitable for the entire year given the tougher than anticipated market conditions, primarily due to the lower outlook for Class 8 industry volumes,” Clarke adds. “We are confident we will generate and implement additional performance improvements to partially offset current industry conditions.”

The truck segment loss narrowed to $23 million in second quarter 2016 versus a second quarter 2015 loss of $51 million, driven by lower structural cost, improved mix, lower accelerated depreciation charges and other income, which were partially offset by higher year-over-year adjustments to pre-existing warranties and an increase in used truck reserves. 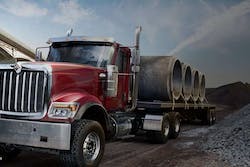 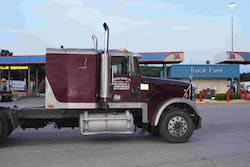