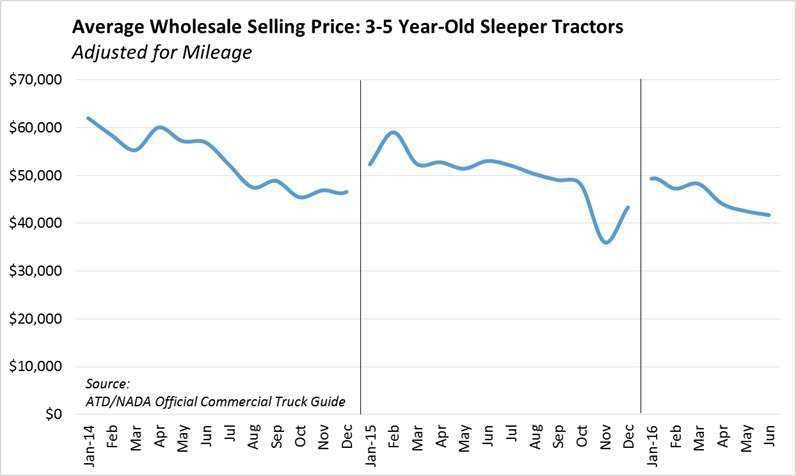 This year has been unkind to freight rates, and fleets looking to shed excess equipment haven’t found the secondary wholesale market any more forgiving.

According to data released Wednesday by NADA, a division of J.D. Power, a year-to-date trend shows trucks of model years 2011-2013 have all lost a double-digit percentage value.

Noteworthy, according to Chris Visser, J.D. Power commercial vehicle senior analyst and product manager, is that these figures equate to an overall monthly loss of less than 3 percent – substantially better than the nearly 5 percent average monthly loss in the second half of 2015.

“For context, trucks auctioned in the fourth quarter of 2015 brought an average of 16 percent more money than trucks sold in the second quarter of 2016,” he says.

“This figure continues to outperform our earlier forecast of 4 percent to 5 percent,” Visser says. “However, 2.6 percent is more than double the 1.2 percent average monthly depreciation in the same period of 2015. Further, trucks in this age cohort are bringing an average of $7,965 (or 14.9 percent) less money in 2016 than 2015.”

“The cohort with the best value retention looks to be trucks of model year 2013 with 400,000 to 500,000 miles,” Visser says. “Trucks in this age and mileage range have consistently returned prices in the low- to mid- $40,000 range since January. This is probably a sweet spot in terms of age, mileage, and price for many used truck buyers. [But] note that this same truck brought $10,000 more this time last year.”

Average wholesale prices for sleeper tractors from 3 to 5 years of age dipped almost 2 percent from May to June, driven mostly by a group of low-priced 2014 Volvo VNL64T 670’s, according to NADA. Aside from this group, Visser says, most models brought pricing similar to May. 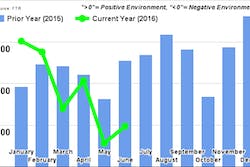 Indicators: ‘Trucking conditions’ continue to sag, but have rates bottomed out? 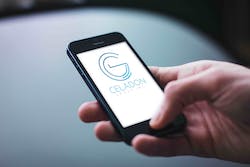 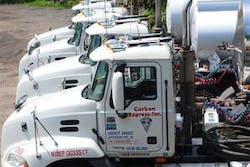 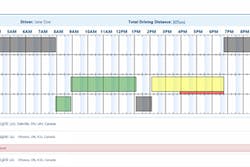