Editor’s note: This post is part of CCJ‘s ongoing coverage of the launch of the 2018 Freightliner Cascadia, unveiled Wednesday. Click here to see CCJ‘s coverage of the tractor’s unveiling.

When Freightliner Trucks introduced the first Cascadia in May 2007, the company said it would offer 3 percent fuel savings over the Columbia and Century Class models it ultimately would replace. The OEM’s flagship truck has matured over the last nine years with a number of fuel efficiency- and emissions-related improvements.

When Martin Daum, president and CEO of Daimler Trucks North America introduced the company’s newest iteration of the Cascadia in front of a group of dealers, press and its executives from 12 of Freightliner’s largest fleet customers at an event in Colorado Springs on Wednesday, he boasted the new 2018 model-year truck could achieve significant fuel efficiency gains over the best-spec’d 2016 Cascadia Evolution as demonstrated in a 2,400-mile road test earlier this summer that netted 8 percent better fuel consumption.

The Cascadia has earned a solid reputation, particularly among fleet customers, and the possibility of a major leap in fuel efficiency certainly earned the attention of the fleet executives in the room, who soon after were released to climb aboard their new rigs and experience the model-year changes for the first time.

Despite the potential leap in fuel efficiency, the new truck is still a Cascadia at heart and is built on the same frame as its predecessor. The fuel efficiency gains stem largely from advancements in powertrain technology and aerodynamic improvements, many of which are the realization of efforts from DTNA’s participation in the U.S. Department of Energy’s first SuperTruck project.

We spoke with several fleet executives in attendance to gauge their initial reaction to the new Cascadias. Here’s what they had to say:

Impressions from a morning ride-along

While DTNA wasn’t ready to hand us the keys to one of the new 2018 Freightliner Cascadias just yet, we were afforded an opportunity for a ride-along on the interstate around Colorado Springs. Our tractor was an Aero version 72” raised roof sleeper cab with the Elite interior trim package and the Detroit integrated powertrain, which included a 2.28:1 ratio 6×4 rear axle configuration, DT12 automated manual transmission and DD15 engine rated at downsped 400-hp/1,750 lb-ft torque.

The DT12’s skip shift feature got us up to speed quickly as we pulled from the traffic light and onto the interstate onramp. Once we were underway, the first thing that stands out is the noise, or more accurately, the lack of it. Thanks to the third door seal and 3M Thinsulation, we didn’t have to raise our voices to be heard during our conversation with Lee Gallant, technical service advisor for Detroit and our driver for the morning.

Navigation on the new 5-inch instrument display – located directly in front of the driver in the middle of the instrument cluster panel – is a snap with steering wheel-mounted controls that toggle between the different menu items such as diagnostics, audio controls, driving assistance, setup options, trip information and more.

Our tractor was equipped with the optional Detroit Assurance safety package which includes active braking assist, lane departure warning and adaptive cruise control feature that monitors traffic up to 250 meters in front of the vehicle using radar on the front bumper. If the system detects a vehicle in front of the truck, the information display shows its approximate distance and road speed and adapts speed automatically.

Adaptive cruise control worked well during our demonstration ride as we eased along in the right lane at 65 mph and cars darted in and out in front of us, but never to the point that the system had to engage the service brake. You could certainly feel the engine brake activate when a slower car caused the system to reduce speed, but we decelerated at a natural rate and quickly returned to our set 65 mph cruising speed once the slower car exited the interstate, all without Gallant ever having to touch the controls or brake and accelerator pedals.

Unfortunately, the flat route we took around the base of the foothills east of the Rocky Mountains didn’t lend itself to demonstrate the DT12 transmission’s newest-generation intelligent powertrain management (IPM4) that uses GPS technology to anticipate changes in road terrain and adapts transmission and engine functions to optimize fuel efficiency as it crests and descends hills. But you can expect future coverage on that and other new features as a media test drive event is in the works for the near future. 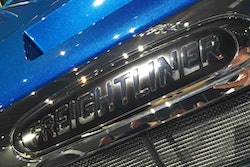 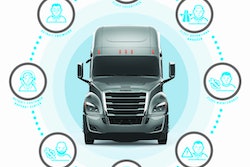 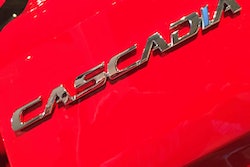 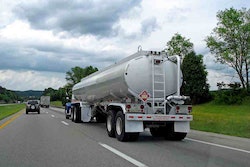