Arizona is the latest state to install sensors along an interstate to help transportation officials detect when winter weather could deteriorate road conditions, the Arizona Department of Transportation announced last week.

ADOT installed the sensors in three locations along I-40 west of Flagstaff, which will help the agency forecast the likelihood of ice forming on the interstate. The agency says the sensors measure the salt content of road surface moisture, which affects the freezing point of the road, as well as the ground temperature beneath the road to determine if a road will freeze.

With this information, ADOT says it can be more proactive in de-icing the interstate. The agency adds that the data it has collected so far has been helpful enough that it plans to add more sensors in high-country roads in the next few years.

“Technology can provide us with another way to keep motorists safe as they travel to Arizona’s colder regions,” said Audra Merrick, district engineer for ADOT’s North Central District. “These sensors are another tool in ADOT’s toolbox to help keep the highways clear of snow and ice during winter season.”

Rick Nelson, who coordinates the American Association of State Highway and Transportation Officials (AASHTO) winter maintenance program, says these sensor systems are common across the U.S., and are in use in all 50 states.

“Just knowing it’s raining or snowing really doesn’t tell you anything about what the roads are going to do,” Nelson says. “These sensors help transportation departments create a forecast with the pavement temperature on top of a precipitation forecast, and if everything lines up, they can put their chemicals down early and be proactive.”

In some parts of the country, namely the I-80 corridor from California to Wyoming, states use signs to alert drivers of any weather issues in the upcoming states, Nelson says. He adds that several states, including Wyoming and Oregon, are using the sensor systems to set variable speed limits with poor road conditions to help keep interstates open and prevent accidents. 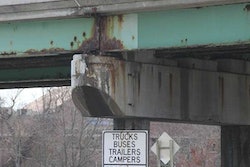