Volvo Trucks North America introduced its Remote Programming solution, an expansion of its Remote Diagnostics platform that allows over-the-air powertrain software and vehicle parameter updates across North America anywhere a cellular network is available. The new system, which was announced at the 2017 Technology & Maintenance Council Annual Meeting and Transportation Technology Exhibition in Nashville, will be available later this summer for all Volvo trucks equipped with Volvo-powered, 2017 GHG-compliant engines.

Ash Makki, Volvo Trucks product market manager, says up to 75 percent of all software updates are neglected by customers industry-wide, largely because of the time traditionally required to schedule, take a truck out of service and perform the update at a dealership or maintenance location – 2.3 days on average.

“For a 25-truck fleet, those productivity losses equal $126,500 per year based on downtime costs of $1,100 per day per truck and an average of two software updates per year,” says Makki.

With Volvo’s Remote Programming, Makki says the engine software update procedure can be accomplished during a driver’s scheduled rest period, and fleet-specified vehicle parameter updates, such as speed limit settings, in a matter of minutes.

Volvo’s Remote Programming procedure starts when the fleet manager is notified of an available software update and is prompted to authorize the download. A service agent at Volvo Trucks Uptime Center verifies the truck is parked in a safe location and instructs the driver to leave the truck ignition switch in the ON position and initiates the update. Once completed, the agent notifies the driver that he is safe to continue his route.

Volvo Trucks is focusing its Remote Programming release solely for its new 2017 engines, but company executives acknowledge the possibility of OTA capabilities for certain earlier-model tractors equipped with Volvo power and Remote Diagnostics platform at a later time. 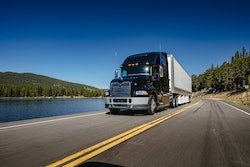