Increasing freight demand was a strong driver of the TCI’s growth, FTR reports. The first quarter of 2017 registered the second strongest growth since the 2008-2009 recession. FTR projects freight demand to grow throughout the year.

“Overall, our expectation of improvements in freight demand for 2017 are coming to fruition. However, we are seeing a significant difference between the contract carriers, specifically those in more dedicated routes, and the spot market. Contract markets are showing limited load growth and weak pricing, but spot market indicators are telling a very different story,” says FTR’s Jonathan Starks, Chief Operating Officer.

“Importantly, truck capacity in the spot market is down during that same time. This has led to significant rate increases for spot moves, with the average rate up more than 10 percent on a year-over-year basis,” he says. “We typically see spot markets move prior to the contract arena, so we would expect to see stronger contract pricing negotiations as we finish 2017 and head into 2018. The market is gaining strength, and conditions for carriers are showing significant improvements.”

“We are leaving the freight recession in the rearview mirror,” said Mark Montague, industry pricing analyst for DAT. 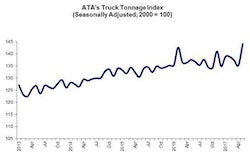