Bracing for Uber’s impact: How worried should your fleet be about market disruptors?

The “sharing economy,” loosely defined as peer-to-peer transactional systems for goods and services, has upended traditional industries across the globe. Last month, rideshare industry giant Uber launched its long-awaited Uber Freight, bringing with it the potential for disruption in the way carriers and owner-operators bid on and move freight in the future.

Before you turn a blind eye to Uber’s new trucking venture, consider the impact the company’s model had on the taxi service industry. According to a report by expense management company Certify, Uber’s share of the passenger fare market grew from roughly 13 percent in January 2014 to 45 percent in January 2015. In metropolitan cities across the country, taxi cab registrations and permits are down by half or more.

And why not? Outside of one harrowing Uber experience in Panama headed the wrong way down a one-way street that left the driver in tears and me nearly wetting my pants in the backseat, I have found the idea of waiting four or five minutes for a less-expensive Uber or Lyft in a (often) cleaner, newer car or SUV a much better experience than hailing a cab.

And the taxi industry isn’t alone. Bike share companies are decimating personal bicycle sales in urban areas, and Airbnb and VRBO are upending the hospitality industry. An HSV Consulting & Valuation report commissioned by the Hotel Association showed Airbnb has a $2.1 billion annual impact on the hotel industry and government in New York City alone.

“What makes you successful on the way up makes you risk-adverse when you are on top,” said Steve Sashihara, president of Princeton Consultants during a panel discussion last month at the CCJ Symposium in Asheville, N.C. “Taxi companies were capable of disrupting their own industry, but they didn’t.”

As worrisome as Uber Freight is to some carriers, it also takes direct aim at brokers, load boards and other intermediaries who would be cut out of the service.

With an estimated $1.45 trillion in annual spending on logistics and transportation in the United States, the trucking industry clearly is an attractive marketplace for outsiders. It has seen several Uber-like and Uber-light models crop up in recent months, including HaulHound, Convoy and FreightRover. But based on Uber’s performance in the rideshare market, they likely will enter the market as the 800-pound gorilla.

Uber Freight’s freight matching service will start out with full truckload dry van and refrigerated trailer loads booked weeks in advance or even same-day. The app lists loads that carriers and drivers can book on a mobile device. Payments are made within seven days of load completion.

Sashihara shared statistics from his firm’s 2017 survey of transportation executives, of which 45 percent of respondents were carriers. According to the survey results, 57 percent of respondents said “Uberization,” or “radical disintermediation” as Sashihara refers to it, will have a moderate or large impact on freight transportation in the next seven years. Only 14 percent said it will have no real impact, and 29 percent said it will be limited to small niches of the industry.

To better prepare for success in the face of disruption to freight transportation, Sashihara said fleets must work hard to improve user-friendly automation and recommended they find ways to limit emails, phone calls and paper forms throughout the freight transaction process.

While it remains to be seen what impact Uber and other freight-matching services will have on the traditional trucking model, the industry would be wise to learn from the lessons of other industries and not dismiss it outright. Just ask a taxi driver – if you ever get in a cab again. 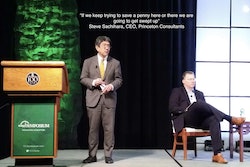