The trucking industry is poised to become a trillion industry within the next decade, according to a forecast released Wednesday by the American Trucking Associations.

Revenue associated with truck transport is projected to top $1 trillion by 2024, according to the American Trucking Association’s 2017-2028 Freight Transportation Forecast report. Industry revenue is expected to keep growing annually by a projected 5.4 percent between 2018 and 2023. Growth is then expected to slow to 4.7 percent through 2028, with motor carrier revenue expected to total $1.24 trillion by the end of that year. Growth in the industry will driven by manufacturing, consumer spending and international trade.

The annual report from ATA provides an outlook as to what the industry can expect to see in terms of tonnage and revenue over the next 12 years. ATA builds its freight and revenue forecast by using data from several sources, including proprietary data and data from the U.S. Army Corps of Engineers, Energy Information Administration, Bureau of Transportation Statistics Commodity Flow Survey, ENO Transportation, and IHS Energy, among others.

“As we look ahead at the rest of the 21st Century, the projections found in Freight Transportation Forecast are invaluable to decision makers in the board room and the hearing room alike,” said ATA President and CEO Chris Spear. “Having good, accurate data is critical to making sure businesses are making appropriate investments in their companies and that our government is making the proper investments in our nation’s infrastructure.”

The full 2017-2028 Freight Transportation Forecast report is available for purchase from ATA online. 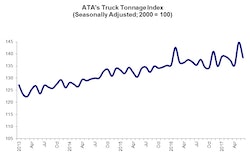 Indicators: Truck tonnage dipped from May in June, but up year over year 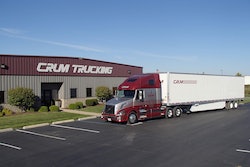