Vnomics Corp., provider of the True Fuel onboard fuel optimization platform, announced the first winner of its new Fuel Champ Award program. The inaugural award winner was chosen from among the more than 20,000 drivers that use the technology through their fleets.

The award was presented to Tammy Newcomer, a driver with Jet Express, during the company’s annual driver meeting. During the American Trucking Associations’ National Truck Driver Appreciation Week from September 10-16, Newcomer drove almost 2,500 miles with an efficiency of over 99.92% of potential MPG, meaning only 2/10ths of a gallon of the over 280 gallons her truck consumed was in excess of the fuel an ideal driver would have used under the same conditions.

“We’re very excited to recognize Tammy Newcomer’s outstanding efforts with a check for $350, which represents approximately how much money she saves Jet Express each month in fuel costs with her efficient driving,” said Ed McCarthy, vice president of operations and customer success at Vnomics. “Compared to Tammy’’s achievement of 99.92% of potential MPG, the average driver unassisted by True Fuel would have used over 9% percent more fuel on average, or more than 100 gallons more per month. In addition, due to Newcomer’s skill, last year alone her truck emitted 13.2 tons less CO2 compared to a typical driver.”

“We are honored that Vnomics has chosen Tammy Newcomer to receive its first Fuel Champ Award and very proud of her fuel efficiency accomplishments,” said Kevin Burch, president of Jet Express. “This recognition also points out the emphasis we place on fuel economy in our entire operation every day. In addition, it illustrates the value we are receiving from Vnomics. With its True Fuel fuel optimization solution we can assist all of our drivers in achieving their highest potential fuel efficiency.”

Throughout the coming year, Vnomics will review the fuel efficiency results of its entire customer base and select the top fuel-efficient drivers. True Fuel only considers factors that a driver can control such as engine speed, speeding and idle time while automatically normalizing out factors such as payload weight, route, weather and truck configuration.

Vnomics True Fuel establishes a truck’s potential fuel economy independent of route, load and other external factors, and then assists drivers to achieve that full potential through in-vehicle driver coaching. The scoring model includes assessments of driver fuel efficiency in the three key areas of engine control, speeding and idling. 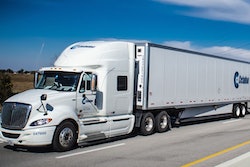