Due to what Wisconsin Gov. Scott Walker calls an “energy emergency” in the state, truckers hauling propane are exempt from federal hours-of-service regulations between Nov. 3 and Dec. 3.

Carriers and drivers “in the process of obtaining and transporting propane” are eligible to operate under the hours suspension on all highways in Wisconsin, including interstates.

In an emergency declaration, Walker states a Rockford, Ill., propane terminal is currently closed for maintenance, causing shortages at other terminals in and around Wisconsin. Additionally, Walker says November and December are generally the months in which propane customers refill their tanks for the winter.

The declaration states the propane shortage is causing longer than normal wait times for truckers at propane terminals, including up to seven hours at the Dubuque, Iowa terminal, which is the main source of propane for the southwestern part of Wisconsin. The suspension of hours regulations will give truckers more flexibility when having to wait longer at these terminals. 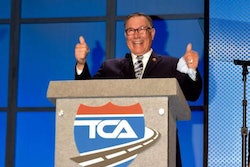 Nominations for annual Drivers of the Year contests open, winners get $25,000

The rise of the next-generation truck OEM