A review of the Compliance, Safety, Accountability (CSA) standards by the National Academy of Sciences (NAS) suggested in June that lawmakers overhaul the program, opening new opportunities for dialog between trucking stakeholders and the regulators that administer the controversial carrier scorecard.

“Does compliance equal safety,” Jeff Davis, principal of Fleet Safety Services, LLC, speaking at CCJ’s Solutions Summit in Palm Springs Tuesday, posed. “I think in some areas it helps, but I’m not sure it’s the only answer.”

The Obama-era regulation has been under fire for years from carriers and lawmakers alike. Congress requested NAS to study the program and issue recommendations to the Federal Motor Carrier Safety Administration about how it can reform the program to more accurately gauge carriers’ crash risk.

The NAS 132-page report echoed many of the concerns from those in the industry such as the scores’ public availability, data quality and quantity issues and the methodology used in CSA’s Safety Measurement System.

“Out of all the things they did in the study, [the NAS] said they were unable to quantify the effect of CSA scores being public,” Davis says.

CSA currently looks at crashes generically, grouping carriers together by the number of crashes they have. Drivers who have an accident in high-crash rate areas are penalized the same as drivers who crash on statistically safer lanes.

One of the recommendations NAS made was to base carrier scores by accumulating more data. The problem with the data CSA currently assembles, Davis says, is that one size doesn’t fit all. For example, carriers with poorer scores aren’t necessarily more prone to have an accident, depending on the type of violation.

“There’s so many outliers with CSA,” he says. “That’s why when you end up with an alert, you may be an outlier. The agency firmly believes unsafe driving is the predominant factor in determining future crashes.”

The way CSA gathers data, Davis says, is part of the problem. He says only 8 percent of carriers monitored by the agency have more than 20 inspections. Meanwhile, 53 percent of carriers labeled as unfit had zero crashes. In a focused CSA audit, investigators can lower a carrier’s rating but cannot raise it to satisfactory levels.

The Number one CSA violation is the driver’s log book and the clerical work that comes with it (form and manner). A non-English speaking driver is No. 2, followed by speeding from 6 to 10 mph over the posted limit.

“Twenty-five percent of all unsafe driving violations is the driver failed to wear a seat belt. If we control our speed and wear our seatbelt, we’ve cut out two-thirds of the pie,” he says.

Indiana is the leading state for unsafe driving violations by more than 20,000 incidents.

The industry is just more than a month from the mandated implementation of e-logs, creating another new reality for carriers who aren’t already using them.

“This ELD business is going to change CSA … it’s going to change the way we do business,” Davis says. “With a paper log, it’s like a stop watch. Under an e-log, it’s an hour glass. Once we flip that baby over, 14 hours later we have to stop.”

“It’s no longer hours of service. We as motor carriers have to start looking at minutes of service,” Davis adds, noting a driver has about 660 minutes of driving time, a mandatory 30 minute rest and about 150 on-duty non-driving time. He cites congestion, accidents, weather, maintenance and fueling as “minute robbers.”

“How do we set up our drivers to succeed,” Davis asks. “It’s communication with the shipper, the driver and all of our staffs. Once that clock starts running, there is no return.” 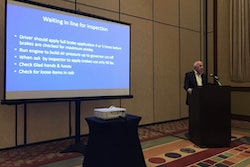 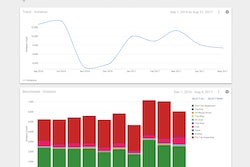 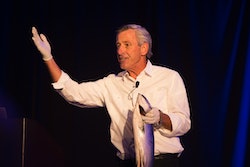 CCJ Solutions Summit: trucking leaders should use the ‘science of storytelling’