Rhode Island Department of Transportation Director Peter Alviti Jr. said in a press conference Tuesday the two locations are expected to raise $7.2 million per year. A total of 14 toll locations are planned, and Alviti said RIDOT expects construction will begin or be completed on those locations within the next 18 months.

According to Alviti, however, the RhodeWorks legislation that instituted the tolls did not include any provisions for toll evasion enforcement if trucks travel around the gantries on local roads and highways.

The tolls are expected to create an additional 10 percent in revenue for the state over the next 10 years, Alviti said, which will be used to reconstruct or rehabilitate bridges.

“When we looked at how the 10% of revenue should be developed from a fairness standpoint, it was pretty evident when we looked at several studies – national studies and our own studies – that heavy commercial vehicles, in particular tractor-trailers, contributed more to the damage and destruction of the infrastructure than any other kind of vehicles,” Alviti said.

The tolls will work with E-ZPass transponders and be charged to a truck’s account. For trucks without E-ZPass, drivers will be billed based on their license plates.

Truckers will only be tolled once per toll facility per day in each direction with a $20 total to travel I-95 across the state. Tolls cannot exceed $40 per day. 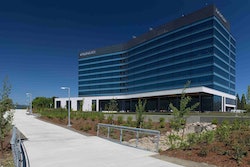