If not for the cool blue light glowing in the grille, and the splashy wrap-job touting its fossil fuel-free propulsion system, Freightliner’s eM2 looks mostly like its diesel counterpart.

There’s little debate that we’re heading down a road toward some level of trucking electrification. What’s up in the air is how we’ll get there and just how far that road will take us. Freightliner‘s eCascadia – the electric version of the company’s long-haul flagship – boasts a range of 250 miles, so we know we can go at least that far right now.

But considering the average long-haul trucker will cover 550 miles in a day, the immediate prospect of an electric Class 8 seems as limited as its range. That’s why, in the interim, Daimler Trucks has honed its immediate attention on medium duty, where the truck is lighter, duty cycle shorter and the need to heap on heavy (and expensive) battery packs diminishes.

Freightliner handed over its first eM2 – the first vehicle in the Freightliner Electric Innovation Fleet – last month to Penske Truck Leasing President and CEO Brian Hard. The two companies collaborated over nine months in the effort to bring this technology to market.

I was able to make a brief, roughly 1.3 mile loop in an eM2 around the Las Vegas Motor Speedway during the Consumer Electronics Show (CES) earlier this month.

The eM2 features up to three battery packs and a range of about 230 miles. My demo unit was outfitted with only one pack, dropping its range to around 50 miles.

If not for the cool blue light glowing in the grille, blue cab marker lights and the splashy wrap-job touting their fossil fuel-free propulsion systems, Freightliner’s eM2 and eCascadia look mostly like their diesel counterparts.

The eM2 boasts an impressive amount of torque and throttle response. There’s no lag waiting for the turbo to spool up. Just sink your left foot a little deeper to the floorboard and it takes off.

The in-cab experience is … well … let’s just call it “unique.” That’s not a commentary on comfort or the truck’s drivability. It’s a testament to the quietness of the powertrain. The absence of engine clatter is notable. So much so that before I ever put my foot on the throttle, I had to ask if the truck was even on. And it was.

To the driver’s lower left is a key in the exact place where it should be, but instead of turning over the non-existent engine it simply turns the truck on. There’s an air brake button on the B-panel – again, in the expected place. Funny story about the air brakes: the electric compressor kicked in during the drive and I lifted off the accelerator because I initially thought I’d ran over something. You rarely notice things like that – the compressor comes on dozens of times during the course of a normal day – but with no other noises to drown it out, it stands out.

A push-button transmission selector is mounted just to the right behind the steering wheel.

Nothing about getting the truck moving feels overwhelming. Even as the eCascadia launches from a stop, there’s barely a faint hum coming from the truck. You can have a conversation at normal levels as it whizzes by you.

Even as the eCascadia launches from a stop, there’s barely a faint hum coming from the truck. Most of the noise comes from the tires but you can easily have a conversation at normal levels as it whizzes by.

I think many assume that trucking electrification is more complex than it really is. With its mid-mount electric motor but conventional driveline, I’m sure the engineering brainpower it takes to calculate putting all the pieces together is fairly complex. But for the guy in the driver’s seat it just feels and drives like a truck.

There are still a lot of complex questions that need a lot of complex answers: What do you do with batteries once their lifecycle in the vehicles is over? How will you fix the trucks when they have an inevitable problem?

Freightliner’s eCascadia needs 550 kWh of electricity – about the same level of juice consumed by 32 all-electric Smart cars. The eM2 needs 325 kWh. How do you build an infrastructure to support a fleet of something like that?

Earlier this year, DTNA formed the Freightliner Electric Vehicle Council composed of 30 customers with strong use-cases for electric trucks, including Penske Truck Leasing, to further drive its sustainable transportation program. The Council will play an important role in providing answers to those questions and light in other grey areas like potential resale value and total cost of ownership.

As the first step in its infrastructure deployment, Penske Truck Leasing will install 20 high-power charging stations across five of its California locations beginning this month. Penske will put an additional nine medium-duty electric eM2 trucks and 10 heavy-duty eCascadia electric trucks into targeted service within its logistics, truck leasing and truck rental fleets in California and the Pacific Northwest later this year.

Those trucks, accumulating important mileage and driver feedback, will go along way in validating electric truck technologies and driving the decisions that make the eCascadia and eM2 trucks viable daily haulers. 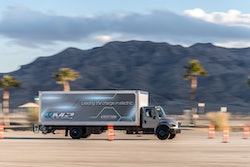 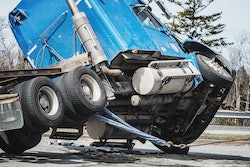