Swift to pay up to $100M to settle driver classification lawsuit

Swift Transportation has entered into a class action settlement of up to $100 million with certain current and former truck drivers to end a nearly 10-year legal fight over drivers claiming they were misclassified as independent contractors and should instead have been classified as company drivers.

Some 19,000 drivers may be eligible to join the class and receive payment, equating to an average of more than $5,000 per class member, though payouts will be based on length of employment, the ultimate number of eligible class members and other factors. The settlement could award payments to those who drove for Swift as far back as 1999.

According to court documents, negotiations began in earnest to settle the class action lawsuit in September 2017, prompted by the company’s merger with Knight Transportation.

Plaintiff drivers, who originally filed suit against Swift in December 2009, claimed that they were wrongly classified as contractors and, thus, were owed certain pay and benefits under federal labor law — including earning an average of federal minimum wage for all hours worked.

Court documents cite mounting legal precedent against Swift, as well as a willingness to end the litigation, as reasons why the parties reached the settlement agreement. The court documents also reference the recent U.S. Supreme Court decision — Oliveira vs. New Prime — that ruled that carriers can’t force independent contractors into arbitration over legal disputes, especially those pertaining to classification issues. 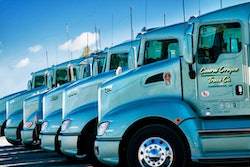