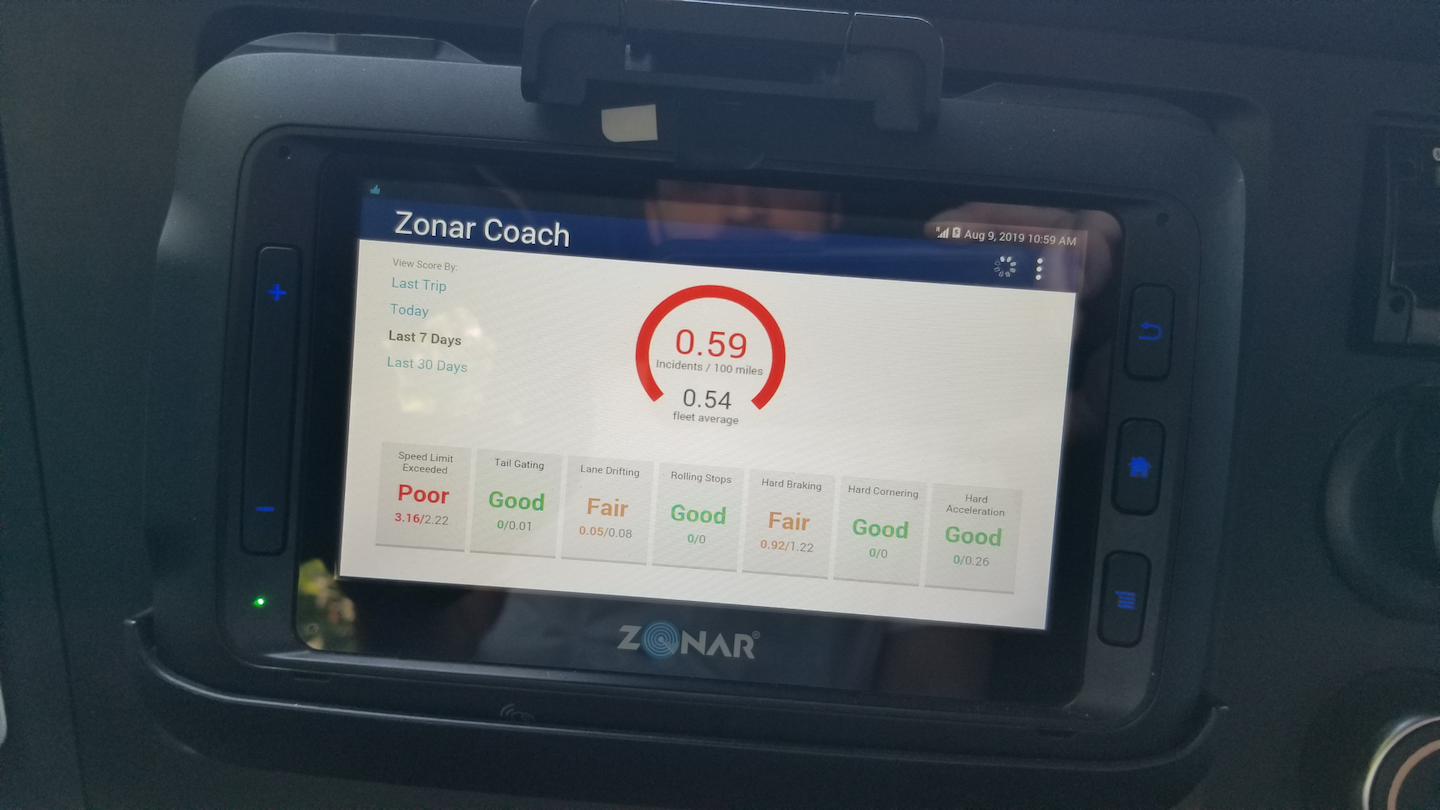 P&B Transport is using Zonar Coach, a camera-based driver safety and performance management system, that gives drivers feedback on a variety of metrics.

These and other technologies integrate with vehicle throttle and braking controls and electronics in the driver display and infotainment systems to give drivers visual and audible safety cues.

Many more safety technologies are on tap in the aftermarket, such as video-based telematics systems for reviewing footage of risky events and scoring driver performance and behaviors.

The number of areas where the hardware, software and data from OEM and aftermarket safety technologies overlap in functionality are growing. This is not necessarily a good thing. Having duplicate hardware in trucks, such as cameras, and multiple data streams may cause fleets to cobble data together from multiple sources to assess risk and coach drivers.

Driver safety systems are converging on several fronts as fleets are pushing vendors to share hardware and integrate applications in ways that improve data consistency, reduce cost and simplify the work environment for drivers.

With a wide portfolio of safety technology, Schneider (CCJ Top 250, No. 7) sees opportunities to consolidate some functions.

The Green Bay, Wis.-based fleet has been ordering vehicles with stability control systems since 2004, long before the technology became standard on trucks in 2017 and onward. Schneider also was an early adopter of AEB (collision mitigation) back in 2012. 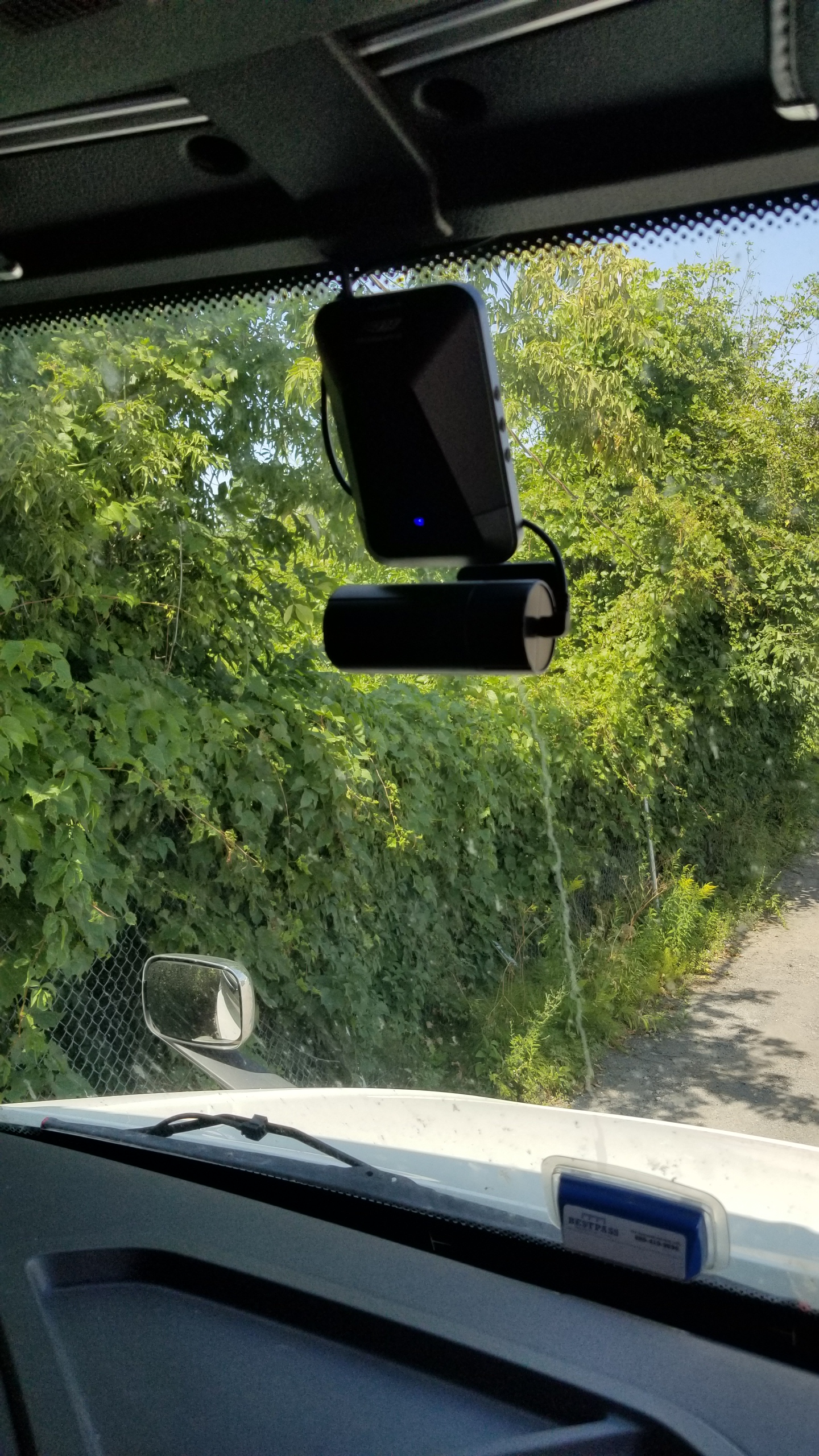 Schneider also has forward-facing cameras that provide safety personnel with footage of risky driver behaviors and events. The footage is triggered when the camera system identifies risky events by monitoring the vehicle databus for activation of the electronic stability control, AEB and other safety systems.

With so many technologies and the company’s ongoing driver training, safety awareness and communication strategies, the possibility of attributing results to the use of any single technology is difficult. Collision mitigation technology is the exception; the safety benefits have been clear from the start, he notes.

“Highway speed rear-end crashes are exactly the ones you want to eliminate,” he says. “This is something we believe all class 8 tractors should have. It has been that successful.”

Collision mitigation technology will  become standard in passenger vehicles by 2021, and Di Salvi hopes that truck OEMs will follow their lead. Another possibility of the technology becoming standard is the “AEB Bill,” H.R. 3773, that is circulating in the House of Representatives as the Safe Roads Act. The bill would make AEB systems mandatory on all new trucks.

Companies that operate mixed fleets of equipment may not be able to standardize on safety technologies for new vehicles. Some OEMs are now offering their own camera and radar-based driver-assist safety systems.

That option is not available on the new Cascadia trucks that Schneider orders from Freightliner, which offers the Detroit Assurance suite that fuses ACC with LDW and optional video capture. Di Salvi sees an opportunity to leverage the cameras on this system to eliminate installing cameras in the aftermarket.

“We do believe that in the future as OEMs add video for sign recognition and lane departure warning that (the camera) could also become a technology that would capture forward-facing video,” Di Salvi says.

Di Salvi also sees an opportunity to leverage video footage from a vision-based safety system it is testing, MirrorEye from Stoneridge. The system has cameras mounted above the driver and passenger doors that feed rearview display screens mounted on the A pillars, and a center screen that displays video to eliminate the blind spot on the vehicle’s passenger side. 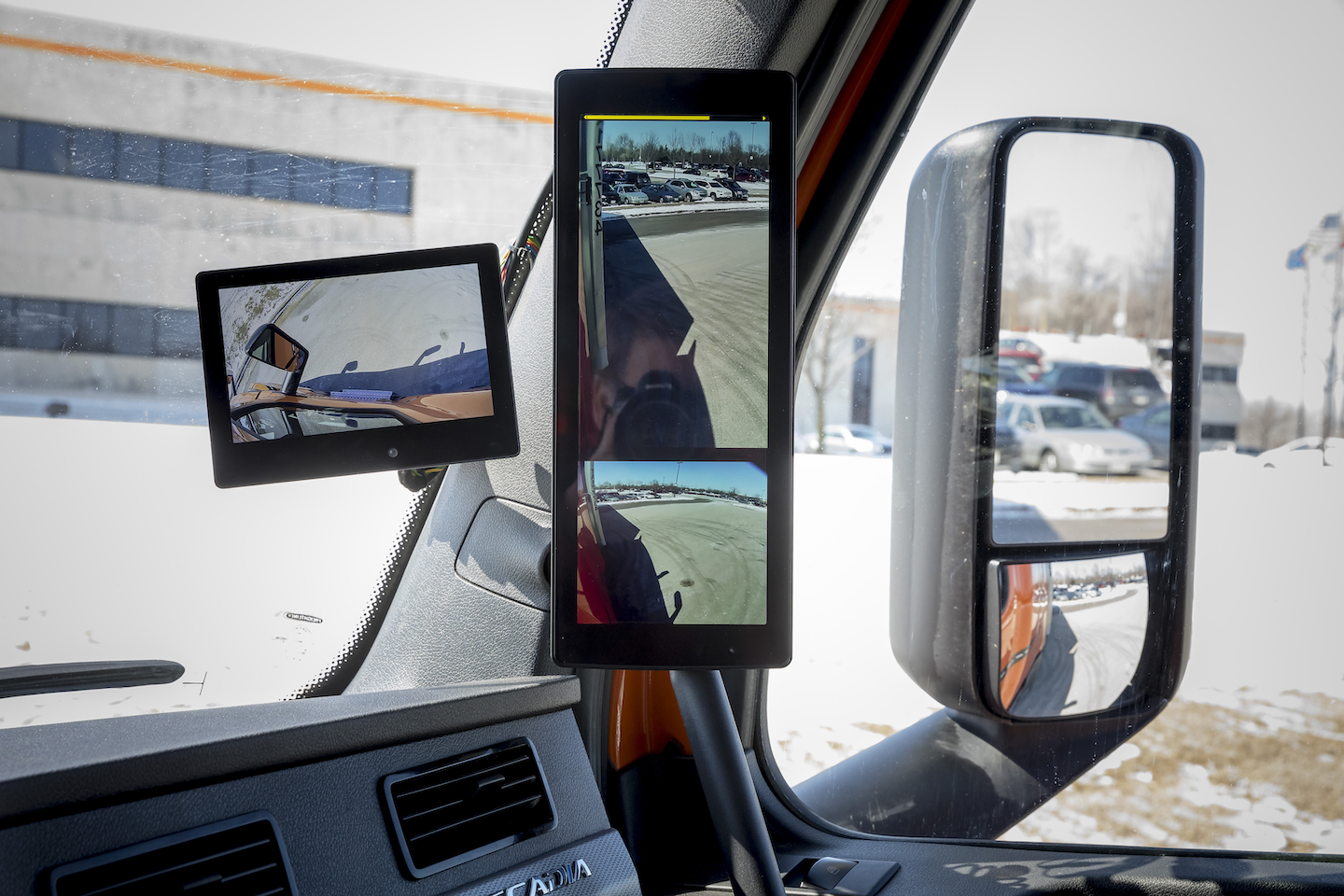 Schneider is currently testing the MirrorEye vision system from StoneRidge that gives drivers an expanded view of their vehicle surroundings.

With MirrorEye, drivers can view their surroundings without having to look outside the truck, Di Salvi says. Management is interested in adding video from MirrorEye to its event recording system to enhance driver coaching and liability protection.

Capturing video from the camera used by Detroit Assurance on the blind side of the vehicle is another possibility, he notes.

With the expanding functionality of video-based telematics systems, driver safety information can be brought together and managed from a single platform.

Oakley Transport, a food-grade tank hauler based in Lake Wales, Fla., has been able to consolidate hardware and data since it began using a video-based telematics system from SmartDrive in its 500-truck fleet. Oakley has been ordering Volvo trucks with the Bendix AutoVue lane departure warning and Bendix Wingman Fusion systems.

The SmartDrive platform uses the forward-facing camera of the Bendix system, and the alerts, to trigger event records. Kelly McDowell, Oakley’s director of safety and compliance, says everything that managers want to know about driver behaviors and risk is now available through the SmartDrive program, which brings data together into “one package to measure safety.” 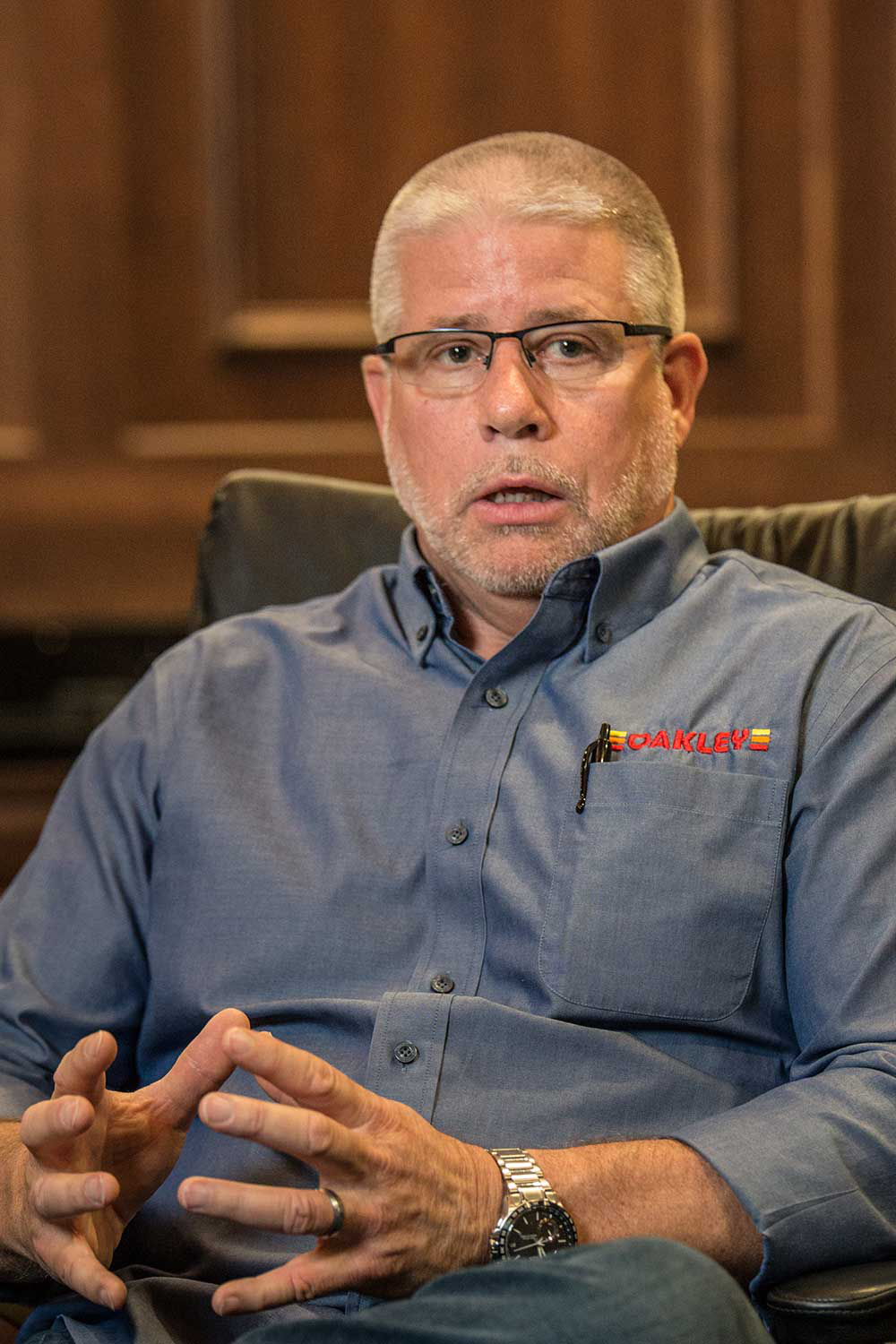 Kelly McDowell, Oakley’s director of safety and compliance, describes the SmartDrive platform as “one package to measure safety.” Photo by Steven Diaz, courtesy of SmartDrive

By having asset, driver performance and safety information in a single database, motor carriers are then able to customize and fine-tune their reporting. In May, Teletrac Navman added a new BYOR “build your own report” feature to its Director mobile fleet management platform with an optional video-based Safety Analytics module.

The BYOR suite has functions similar to Excel Pivot Tables that enable users to export, manipulate and mine information — and graph it — to find relevant metrics and outliers, says Ozzie Flores, product manager of FMCSA compliance and regulations. Examples of relevant metrics include the number of vehicles with excessive engine idling and the percentage of drivers with overspeed events, he notes. Data from other systems can be imported into the BYOR as CSV and Excel files to supplement the reporting capabilities, he explains.

Fleets also can use telematics systems to consolidate wireless costs by merging telematics with video data.

P&B Transport, a 55-truck less-than-truckload and truckload carrier based in Montreal, Quebec, has been using a camera device from Mobileye that alerts drivers for tailgating or crossing over lane markings without using turn signals.

In February 2019, the company installed a camera device from Zonar and added the vendor’s Coach product to the mobile fleet management platform. Coach uses a forward-facing camera that communicates with an app on Zonar’s rugged tablet display to give drivers audible feedback while in motion.

Since P&B Transport has been using Coach, the Mobileye product has become somewhat of a duplicate device, says Brian Telford, manager. The audible warnings are useful, but drivers see Coach as more of an incentive to improve their behaviors than “to not hear beeping,” he says. Coach captures footage of risky incidents and scores drivers.

“Coach is a better overall tool and more appreciated by the driver,” he says.

Schneider is in the process of funneling the data and alerts from its camera system through its mobile telematics system from Platform Science to have a single wireless data plan. 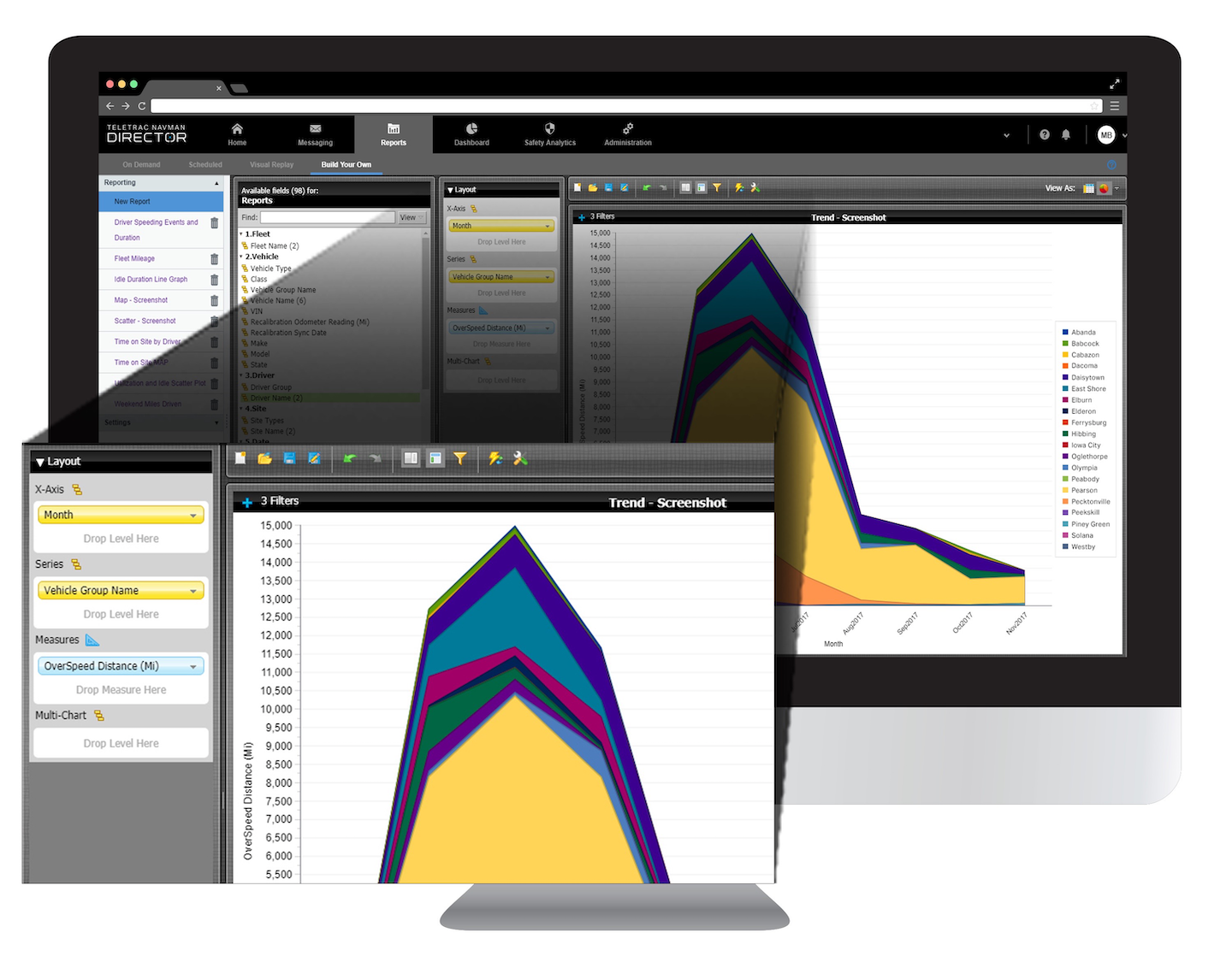 Teletrac Navman’s new BYOR “build your own report” feature in its Director mobile fleet management platform has functions similar to Excel Pivot Tables that enable users to export, manipulate and mine information — and graph it.

Schneider has a suite of mobile apps for driver safety, compliance and productivity that run on Platform Science. One of the apps is from Drivewyze to bypass inspection sites and scales. The app recently added alerts that make drivers aware of upcoming ramps and curves with high rollover risk and low bridges.

“We have been running that with very favorable feedback from drivers,” he says. “It is alerting drivers soon enough so that they can recognize the potential for danger.”

As more driver safety technologies become available, Di Salvi says that finding the right mix to help drivers be safer and more alert behind the wheel is an ongoing challenge that involves some give and take.

“You can’t put everything in the truck, or it becomes too confusing. You’ve got to find the right balance,” he says.