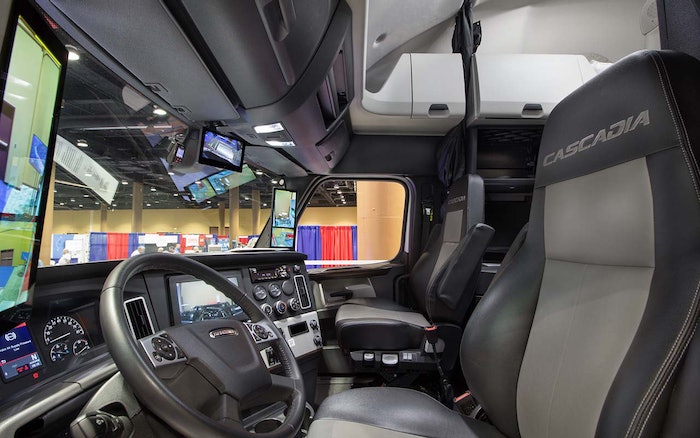 The MirrorEye system from StoneRidge improves driver vision of surroundings.

Safety executives from three of the largest fleets in the United States are losing interest in rearview and blind spot mirrors. Going mirrorless is the better option, they believe.

The manufacturer of the system, Stoneridge, has been in business for 50 years as an OEM supplier of electrical components. In the past few years it has researched, developed and tested an advanced camera system called MirrorEye with input from fleets and drivers.

On Dec. 28, 2018, the Federal Motor Carrier Safety Administration approved an exemption to a rule that requires any vehicle over 25,000 pounds to have mirrors affixed to each side of the vehicle. The total surface area of side or “west coast” mirrors must be at least 50 square inches.

MirrorEye is the only technology to be granted this exemption by the FMCSA so far.

J.B. Hunt uses the standard west coast mirrors and has fender and passenger-side look down mirrors across its fleet of Freightliner Cascadia and Navistar LT tractors. The total mirror surface area on its trucks is between 414 and 440 square inches — about three times more than what the law requires.

All of these mirrors could go away.

“I hope that this mirrorless option will help us remove or reduce the mirrors on the outside of our trucks,” said Greer Woodruff, senior vice president of safety, security and driver personnel.

With conventional mirrors, the Fayetteville, Ark.-based company is seeing three times as many safety events occur on the right side of the tractor versus the driver’s side, he said. The expanded view of the MirrorEye system all but eliminates blind spots on the right-hand side, he noted.

J.B. Hunt has been testing the MirrorEye camera system on two trucks that operate in the New York area for more than 135,000 miles. The technology has proven especially useful to drivers who pick up and deliver to difficult locations.

“Our drivers are really reporting that this is helping them deal with really close quarter situations,” Woodruff said.

Maverick Transportation has been testing the system in several tractors for a total of 600,000 miles. The fleet currently has about 370 inches of mirror surface area, but Dean Newell, vice president of safety and driver training, believes the future of trucking is mirrorless.

Newell is especially interested in the system’s ability to eliminate a blind spot that is created by the front of the A-pillar and the back of the side mirrors. The A-Pillar and mirrors obstruct a driver’s view of cross traffic.

Display screens for the MirrorEye system mount on the A-pillars inside the cab. Drivers do not have to turn their heads as far to see the screens as their side mirrors, explained Woodruff. Drivers can therefore keep their peripheral vision towards the front of the vehicle.

MirrorEye has a wider field of view than conventional mirrors. West coast mirrors open up a rearward field of view at a 20-degree angle, but MirrorEye has a 110-degree view, the company says. When making turns, the system uses the angle from the truck’s electronic steering sensor to pan the rear view for the driver to the left or right, according to the direction of the turn.

The driver “can look at the trailer all the way around the turn,” said Newell.

Drivers have a center screen that shows the full-length of the right side of the truck. Dan Drella, director of safety and training for Schneider National, stressed the value of the camera system from removing this as a blind spot for drivers.

“In our experience you can see from a bit ahead of the front bumper all the way back to the drive tires, essentially two full-lanes wide. Everything alongside the tractor is plainly visible,” he said.

Unlike mirrors, the cameras outside the vehicle are heated and self-cleaning to prevent obstructions from rain, ice and other elements, Woodruff said. The system also gives drivers much better nighttime vision than conventional mirrors with its infrared technology.

All fleet safety executives agreed their drivers have benefitted from the technology to combat distractions. Woodruff noted that 91 percent of the U.S. population has smart phones.

“A lot of people are driving distracted,” he said. “What we find in accidents is oftentimes there is more than one factor. If we can improve visibility for our drivers, maybe we can take a factor away, and then maybe we reduce the probability of that crash occurring.”

“It seems to me that everybody is in a damn hurry. And I’m not just talking about our drivers and our employees. I’m talking about everybody’s like that,” he said. “This is a tool that we can give drivers that can combat some of this.”

“People are still going to be in a hurry, but we can see them now,” he continued.

The cameras, mounted above the truck doors, are more aerodynamic than conventional mirrors, said Steve Fox, director of business development for Stoneridge. He said MirrorEye increases fuel efficiency of a vehicle by 2.5 percent.

The system is available currently as a retrofit. Installation and service in the aftermarket is handled by Velociti. The company intends for the system to become a factory-installed option by OEMs.

Stoneridge did not reveal pricing for MirrorEye to CCJ, but said fleets can expect the payback period for the technology to be within 12 months. Stoneridge also offers an ELD and is looking to add other technologies to compliment the vision system.