Nikola subpoenaed by SEC, DOJ over fraud allegations
Nikola Motor Company confirmed in a regulatory filing Monday that the company, its officers and employees have received subpoenas from both the Securities and Exchange Commission (SEC) and Department of Justice as the agencies look into fraud allegations leveled at the company by short-seller Hindenburg Research.

The company and Trevor Milton also received grand jury subpoenas from the U.S. Attorney’s Office for the Southern District of New York on Sept. 19 and the company received a grand jury subpoena from the New York County District Attorney’s Office two days later. Nikola says it has cooperated and will continue to cooperate with these and any other regulatory or legal requests.

The Freightliner Electric Innovation and Customer Experience (CX) Fleets consist of pre-series production battery-electric medium- and heavy-duty trucks and are used to test integration of the technology into large-scale fleet operations while providing real-time feedback and data to help future development.

Announced in 2018 and beginning operation in 2019, the Freightliner Electric Innovation Fleet includes 30 battery-electric trucks in operation by NFI and Penske Truck Leasing and its customers.

The D13TC is equipped with Dynamic Torque, a system that enables the driver to operate the truck in a more fuel-efficient manner by adjusting to the exact load without impacting performance. It also offers three individual drive modes, as well as an additional 405 horsepower rating.

“The D13TC engine optimizes fuel efficiency and increases the value to customers through cost savings and overall ROI,” said Allison Athey, product marketing manager at Volvo Trucks North America. “Making the engine standard was the next logical step, in addition to offering customizable fuel economy packages that further maximize profitability and reduce the truck’s impact on the environment.”

Volvo is also offering enhanced fuel economy packages for VNL and VNR models, which can provide up to 16% improvement in fuel efficiency savings for the VNL and up to 6% for the VNR over baseline models, depending on the package.

The allocation of units will be determined by Pride with special consideration in states and provinces with the most welcoming electric commercial vehicle environment, such as California.

“Pride Group Enterprises’ vision is to invest in facilities that will support charging, full-service maintenance, and a consistent supply of electric trucks on North American highways,” said PGE CEO Sam Johal. “We have first-hand knowledge of the transportation industry across multiple verticals, and we strongly believe that electric truck technology will overcome many challenges facing traditional diesel technology such as the related maintenance and associated down-time.”

To support the arrival of these units and all-electric Class 8 trucks, PGE is already investing in the necessary infrastructure for parking, charging and full maintenance at all of its locations.

The company operates businesses in equipment rental, leasing, logistics and sales, and it has plans to deploy the Tesla Semis across all business divisions. 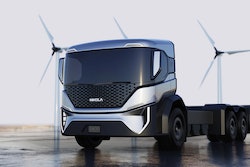