A tidal wave of demand could be headed to a trucking segment that's the least capable of absorbing it.

A summer travel season that's expected to be defined by "revenge vacations" – people hitting the highways en masse following nearly a year stuck at home under pandemic restrictions – is expected to bring with it a surging demand for fuel, yet liquid bulk haulers already have more to haul than drivers to pull it.

Steve Rush, past-chairman of the National Tank Truck Carriers association and CEO of Whartron, New Jersey-based lubricant base oil petroleum product hauler Carbon Express, said "the driver shortage is not perceived. It is real. Liquid bulk shipments are on average out two weeks right now with no immediate relief in sight."

The age of tank drivers tends to skew on the higher end of industry's average age of 50, and "when COVID hit," Rush said, "the petroleum side of the trucking industry got really smacked hard because they had a lot of older drivers. And they're not coming back."

The Drug Clearinghouse has tagged more than 69,000 drivers with a drug violation since its implementation in January of last year – 14,000 were found through the first three months of this year. But more than 41,000 of those drivers have yet to start their return-to-duty status as of last month.

National Tank Truck Carriers Executive Vice President Ryan Streblow noted that with many truck driving schools shuttered or limited during the pandemic, there wasn't an influx of new drivers coming into the market to replace those that retired, stepped out of the industry with COVID concerns, or were sidelined with a failed drug or alcohol test.

Demand for petroleum-based products cratered during the peak of the pandemic, prompting some liquid bulk haulers to jump into van freight and chase consumer goods loads that are easier to haul yet still command healthy rates.

Rush added a flatbed division last year as his petroleum business sank because "we weren't keeping our guys busy," he said. "I knew if we put them on unemployment, they were't coming back."

Rush has since wound down much of that division as the tank business rebounded, but other carriers have been reluctant to switch gears so quickly yet again.

Katie Love, marketing manager for WorkHound – an agency that monitors workplace feedback to help boost satisfaction and retention – said her company hasn't heard direct concerns from fuel haulers regarding the driver shortage impacting fuel availability, but "we all know that driver turnover and shortage negatively impacts the entire supply chain. We've all heard the anecdote about how quickly toilet paper would leave the shelves if we lost qualified CDL drivers, gasoline is no different."

Demand for fuel is approaching levels not seen since 2019, but the fuel itself is plentiful even if the supply of drivers qualified to haul it is not. Streblow estimated that about 10% of his organization's membership had tank trucks sitting idle in 2019, but that is now upwards of 25%.

Pilot Travel Centers Vice President of Transportation Jordan Spradling said the company's network of more than 750 truck stops are preparing for a busy summer travel season "and don’t anticipate any fuel shortages. Our strong supply chain and fleet of drivers are working hard to ensure that fuel remains available at our travel centers across the country," he said.

Love’s Travel Stops uses its own companies – Musket and Gemini – to secure and deliver fuel to its more than 500 locations, "so we don’t anticipate major fuel shortages for our customers," barring unforeseen circumstances, said Caitlin Campbell, Love's media relations specialist. "Of course, that could change if there’s a major disruption in production from a storm."

Tina Arundel, TravelCenters of America director of communications said the nearly 300-location chain is aware of a driver shortage in the industry, but "we are not anticipating any major concerns this summer and have a vast carrier network in place, with many in the same markets, to help minimize any potential issues," she said. "These multiple partners allow for an expanded capacity of supply if needed."

Streblow noted that any shortage of fuel would likely be isolated and tied to some stations seeing delays in receiving replenishment. 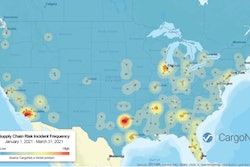