CCJ Staff
Aug 6, 2021
West Coast port markets are driving demand for truckload services as ships continue to bunch up outside the ports of Long Beach and Los Angeles, where about one-third of all container imports arrive.

The number of available loads on the spot truckload freight market climbed 0.3% during the week ending August 1, according to DAT Freight & Analytics, operator of the industry’s largest load board and the DAT iQ data analytics service.

The number of available trucks fell 1.2% compared to the previous week.

Truckload rates on the spot market typically drop after the July 4 holiday but were elevated all month, according to DAT, buoyed by demand in Southern California and other port markets. July volumes declined compared to June – the busiest month on record. The number of available van, refrigerated and flatbed loads on the DAT network fell 17.1% and capacity dropped 6.6%.

West Coast port markets are driving demand for truckload services. Ships continue to bunch up outside the ports of Long Beach and Los Angeles, where about one-third of all container imports arrive. The average outbound van rate from Los Angeles was $3.70 per mile last week and Los Angeles to Phoenix, a key lane for imported e-commerce freight, hit $4.61 a mile.

Los Angeles to Chicago averaged $3.13 per mile for spot van freight and the number of loads moved soared 39.9% in the last four weeks. The ongoing chassis trailer shortage has been exacerbated by higher-than-normal container dwell times for local container delivery and intermodal rail cars to move containers east. All of this is contributing to higher spot market truckload volumes off the West Coast as shippers struggle with reduced intermodal capacity on freight lanes to congested inland destinations.

The national average spot flatbed rate held at $3 per mile last week, 11 cents less than the July average. Flatbed load-post volumes fell 2% week over week and are now down 4% over the last month. Capacity tightened with an 8% decrease in equipment posts compared to the previous week, which pushed the flatbed load-to-truck ratio higher from 44.6 to 47.4.

"We expect freight demand to remain strong given the broader economic recovery combined with the continued tailwinds because of the Federal Government’s stimulus package which had a notable impact on our operations in the first half of this year," the company wrote. "On the supply side, the market for professional drivers remains challenging which is helping to keep a lid on supply. These conditions are expected to continue to support spot market rates in excess of contract rates and a strengthening contract renewal environment through the remainder of 2021." 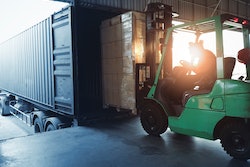 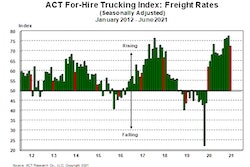