The unkinking of a supply chain that's been in turmoil since mid-2020 is helping alleviate global inflation, according to supply chain specialist OCI.

U.S. inflation fell sharply in December, with the month-over-month headline rate negative and annualized core inflation rate of just over 3%, an indicator of optimism according to OCI CEO Oliver Chapman.

“Supply chain adjustments are helping alleviate the global inflation crisis," he said. "We expect prices to continue to fall. The very indicators pointing to inflation this time last year are now, if anything, pointing to deflation."

The price of lumber is down by roughly two-thirds over the last year, not far from its five-year average before the Ukrainian crisis. Brent crude too, Chapman said, has fallen by roughly one-third since last summer. As for shipping costs, the Baltic Dry Index is around one-third its level from a year ago, and if the trend seen in recent months continues Chapman said it will soon be down to levels seen during the COVID crisis.

The e2open Ocean Shipping Index Q4 2022 Report shows that as of Jan. 1 it takes a company an average of 63 days to deliver goods to truck or rail carriers after booking with an ocean carrier and completing the cross-ocean journey – an eight-day global average decline from the same quarter last year. The top ports contributing to Export Time Performance improvement when considering all global ports are Tuticorin, India; Valparaiso, Chile; Los Angeles; Vancouver, Canada; and Jeddah, Saudi Arabia. Exports from Asia to North America and Europe saw cross-ocean journeys reduced by nine days and eight days, respectively, from the prior three months, and down 12 days from the same quarter in 2021.

Prices for wholesale goods and services tumbled in December, another signal that U.S. inflation is continuing to ease. The producer price index, which measures final demand prices across multiple categories, declined 0.5% for the month, the U.S. Bureau of Labor Statistics reported Wednesday, exceeding the 0.1% decline that was widely anticipated. In December, the decrease in the final demand index can be attributed to a 1.6% decline in prices for final demand goods. In contrast, the index for final demand services rose 0.1%.

“Last year, there was a slight concern that falling commodity prices were partly a function of the high dollar, but in recent months, both the pound and euro have risen sharply against the dollar," Chapman said. “The only major concern is that wage increases might become embedded into the system. Inflation expectations matter, and if employers and employees anticipate inflation — despite falling commodity prices — their expectations might become self-fulfilling."

“[It] is clear that the worst of the inflation crisis is behind us. We expect it to continue to fall in the U.S., moving close to the target rate of 2% within a few months," Chapman added. "The UK and euro area will follow suit, but it might take longer for the price falls to gather momentum, and in the UK especially, the decline in inflation might be quite slow.” 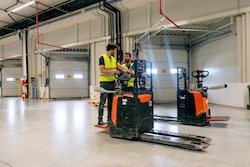 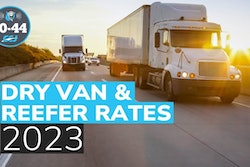 What should carriers expect from dry van and reefer rates in 2023?