Autonomous trucking technology upstart Gatik, in collaboration with Walmart, is now operating daily without a safety driver behind the wheel of its delivery route in Bentonville, Arkansas. Gatik is moving customer orders between a Walmart dark store and a Neighborhood Market via a fleet of multi-temperature autonomous box trucks.

Gatik claims its deployment with Walmart in Arkansas represents the first time that an autonomous trucking company has removed the safety driver from a commercial delivery route on the middle mile anywhere in the world.

“Arkansas and Gatik have shifted into the future with Gatik’s self-driving delivery truck,” said Arkansas Governor Asa Hutchinson. “It is fitting that Arkansas, which is home to the greatest retail companies in the world, is the launching pad for this innovation in retail delivery.”

"Our deployment in Bentonville is not a one-time demonstration," said Gatik CEO and co-founder Gautam Narang, who called the fully driverless run a milestone signifying "a revolutionary breakthrough for the autonomous trucking industry. These are frequent, revenue-generating, daily runs that our trucks are completing safely in a range of conditions on public roads, demonstrating the commercial and technical advantages of fully driverless operations on the middle mile. We’re thrilled to enable Walmart’s customers to reap the benefits.” 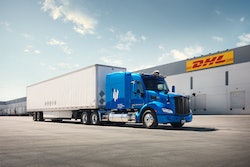