Jason Cannon, CCJ chief editor
Oct 24, 2022
At his seventh MC&E as ATA President and CEO, Chris Spear said Monday that his primary objective is winning… winning on behalf of ATA members and the industry.

Chris Spear, the American Trucking Associations President and CEO for the last seven years, has taken the position that trucking is winning... right now.

“Since taking this job, I’ve made it clear that your association’s primary objective is winning… winning on behalf of the members and this great industry, no matter who the electorate sends to Washington,” said Spear, who delivered his State of the Industry & Association remarks Monday morning at the American Trucking Associations Management Conference and Exhibition (MCE) in San Diego. "We don’t get paid to point fingers. Partisanship is not a crutch. You’re doing your job under the toughest circumstances.”

Spear cited ATA’s legal victories in federal court over the state of Rhode Island and it's truck-only tolling and the Biden administration's employer-based vaccine mandate, as "impactful and historic."

Spear also pointed to ATA’s influence in helping push through the Infrastructure Investment and Jobs Act (IIJA), which includes investment in roads and bridges and workforce development programs like a pilot program for younger commercial drivers.

"Good outcomes take time, and this bill was no exception," Spear said. "The IIJA is not only a benefit to our roads and bridges, but also for our workforce. After years of building bipartisan support for properly training and hiring younger talent under the Drive Safe Act, the IIJA included a national program that does just that. The nay-sayers can whine all they want, but this is a step toward safety, not away."

The Women In Motion program, he said, adds new emphasis on the role women play in the trucking industry. "What makes this program unique is its ability to turn barriers to entry into solutions for recruitment," he said. "Improving the safety and security for our workforce, including well-lit parking, has a direct correlation on attracting more women into our driver force."

Through ATA, Spear also seeks to develop "national standards with the EPA, avoiding a state-driven patchwork of unachievable mandates and timelines, and endless and costly litigation," he said.

“Sixty-six trucks today emit what just a single truck emitted back in 1988 – that’s innovation at its best. Our working hand-in-glove with the EPA to issue emissions reduction rules has shaped realistic targets and timelines and ensured that equipment has been thoroughly tested. And your investments in automation and alternative energy sources will only ensure that trucking drives future growth and outcomes."

The agency will also continue its fight against lawsuit abuse.

“With six states having already enacted lawsuit abuse legislation, the ATA federation is using its reach in every state to put the plaintiffs’ bar on defense,” he said. “We now have 11 more state associations preparing legislation that will further shape a landscape where jury decisions are driven by facts, not Powerball payoffs."

Spear also has ATA's sights set on the repeal of the Federal Excise Tax on heavy trucks – "a tax founded just shortly after the Titanic sank," he said, that adds about $25,000 to the purchase price of a new truck. 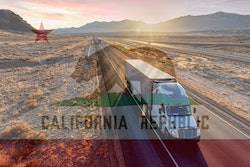 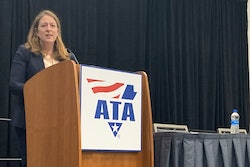 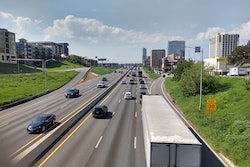 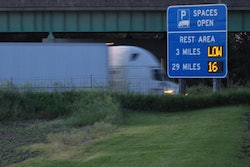